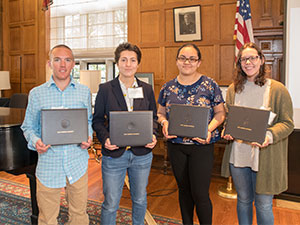 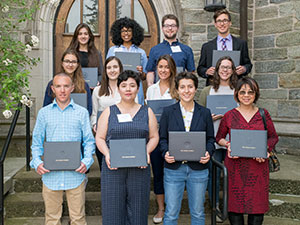 Application for the 2021-2022 Department of Languages and Cultures Scholarships

Decisions will be announced in mid-February 2022

The West Chester University Department of Languages and Cultures Study Abroad Awards program provides up to $12,000 in assistance every year. Undergraduate majors in French, German, Russian and Spanish who are seeking their initial study abroad experience as part of the Bachelor of Arts in Languages and Cultures are eligible to apply for awards of up to $3,000 in each of the four languages above.

Consideration in awarding funds for study in one or more of the above four languages will be given to the students’ stated goals, the students’ financial need or otherwise (to meet major requirements and / or professional standards), and their academic performance to date.

The awards must be applied to costs for summer, winter, a semester or full-year programs of study abroad, including tuition, room and board, transportation, books and fees.

Students must submit a transcript of all undergraduate study, a letter of their goals, two letters of recommendation, and the cover application. At the end of study abroad program, successful applicants are required to submit a report detailing the expenditure of the funds and their academic and personal growth.

Students going abroad or planning to go abroad are also encouraged to apply to the WCU Foundation Study Abroad award.

Upon completion of a study abroad program, award recipients are required to submit a report detailing the expenditure of the funds and their academic and personal growth. The reports are submitted electronically to the Student Services Committee Chair.

We offer five scholarships and two awards each year to meritorious students in recognition of their achievements in the study of languages. The application form is available above to download, fill in and submit to the Department of Languages and Cultures, Mitchell Hall 224 610-436-2700.

Mary-Ann Reiss was an Assistant Professor in the WCU Department of Languages and Cultures, 1975-1992, teaching German and Spanish, and supervising student teachers. The author of many articles, reviews, and papers on language learning and literature, she added this generous gift to her years of service as a kind colleague and dynamic teacher. The Mary-Ann Reiss Foreign Studies Award is issued from a trust fund established by Mary-Ann Reiss, and awarded yearly to one or two students. Financial need may be considered, but focus is on the requirements below.

This scholarship was established in honor of German naturalist Alexander von Humboldt (1769-1859), the founder of Plant Geography and the preeminent scholar of his time. He explored much of Latin America, collecting and cataloging the flora of the New World.

The recipient must be an outstanding undergraduate Language major planning to participate in a Study Abroad language program.

The late Dr. Alfred D. Roberts, whom this award honors, received his undergraduate degree in Modern Languages from Ursinus College in 1949 as Valedictorian of his class. He received his M.A. and Ph.D. degrees in French from the University of Pennsylvania. Dr. Roberts served as professor of languages at WCU (1959-1988), founding the Language Department at WCU, and serving as chairperson (1962-1974). In addition, Dr. Roberts founded the Junior Year Abroad program in 1963, and was president of the Faculty Senate (1969-1970).

Dr. Celia Esplugas, who has established this award, completed her B.A. in ESL in her native Argentina. She received an M.ED and an M.A. from Bowling Green State University, Ohio, and her Ph.D. from The University of Toledo, Ohio. She served as professor in the Department of Languages and Cultures from 1990 to 2009. She taught Spanish and culture courses cross listed with Women's Studies and Comparative Literature. She served as Spanish Coordinator and chaired various departmental and university-wide committees, as well as advising students who participated in study-abroad programs. She has published nationally and internationally.

The recipient must be a Hispanic student majoring in any language. In the absence of a qualified Hispanic major, the scholarship will be awarded to a deserving minority student of any ethnic group majoring in a foreign language. If no major meets the stipulated GPA requirements, the scholarship will be awarded to a student pursuing a minor who meets these requirements. The recipient must use the scholarship money (a) to participate in a study-abroad language program, with preference to programs in Argentina and in International University Studies (Seville, Spain), or (b) to defray expenses of his/her language courses, e.g., purchasing books, attending a conference, etc. Candidates will have a minimum 3.0 GPA and at least 3.25 in the major or minor. Applicants will be in the third or fourth year of their undergraduate studies. Candidates should demonstrate outstanding academic ability and leadership potential. Applicants should demonstrate active involvement in the Hispanic/minority community, including community service and plan to continue their contribution to the Hispanic/minority community in the future.

The Department of Languages and Cultures Honorary Awards

The following Department of Languages and Cultures awards are issued each year to outstanding students in the languages noted below. The decisions on these two awards are made independently by the appropriate faculty. STUDENTS CANNOT APPLY FOR THE TWO AWARDS DESCRIBED BELOW.

Dr. Erminio Braidotti taught Spanish, Italian, Latin, and Latin American Culture at West Chester University from 1978 to 2013. Dr. Braidotti established this award to honor the memory of Joe and Tillie BRAIDOTTI, who provided for his education in the United States; and Dr. Ronald LOMBARDI, one of the founding faculty members of the Department of Foreign Languages (now Languages & Cultures), who gave him the opportunity to start his 35-year teaching career at WCU. This cash award is granted each year by the Department Faculty to a student or students in their junior or senior year who have demonstrated marked proficiency in Italian and/or Spanish.

Dr. Ethel M. Staley taught French at WCU from 1930 to 1952. Each year the French Language section selects an outstanding student to receive an Ethel M. Staley certificate of excellence and cash award.

The Department of Languages and Cultures TESOL Award

Eligibility: Graduate students in the TESL MA or TESL Certificate Program with a 3.7 GPA or higher. Must have completed 3 TESOL graduate-level courses (9 credits) at WCU.

The recipient will receive up to $500. This funding may be applied towards the cost of tuition, supplies (e.g., books), or travel.

To apply, please submit to the Languages and Cultures Department (MIT 224) the following:

Awardees will be notified via email by mid-March.

Awards will be formally given at the Departmental Awards Ceremony in April, 2020.