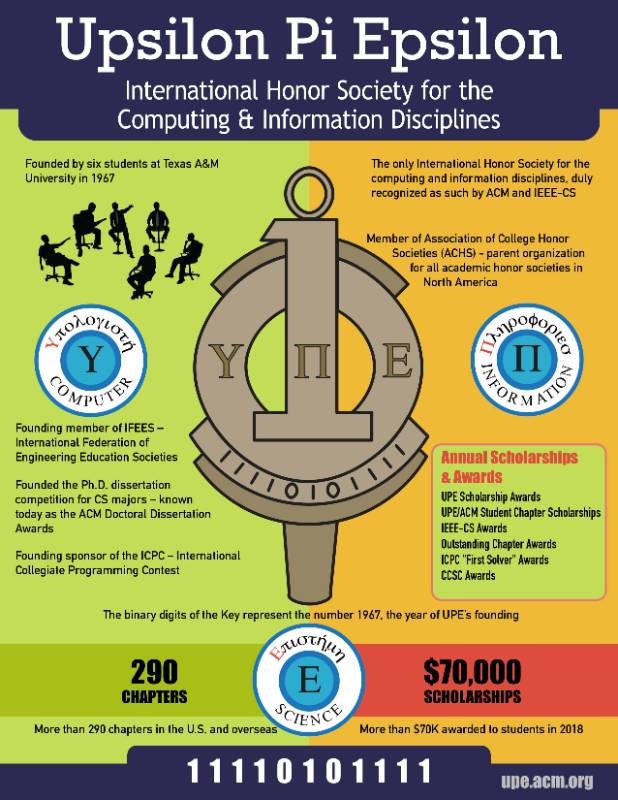 The Upsilon Pi Epsilon Association was founded at Texas A&M University in 1967 for students and faculty who exhibit superior scholastic and professional achievement in the computing science curriculum. It remains the only National Honor Society for the computing and information disciplines and is recognized as such by the Association for Computing Machinery (ACM) and IEEE Computer Society.

Students are invited to join the West Chester University Chapter of UPE based on outstanding achievement, high scholarship and character.

Formal invitations to join UPE will usually be sent in Fall of every academic year. Induction into the society will usually occur in the Spring semester.

Graduating students may also purchase a UPE stole to be worn with commencement regalia. Go to the UPE website for UPE memorabilia. The ACM now provides free ACM student memberships to active members of UPE for one year, which includes subscriptions to Communications of the ACM, ACM's Digital Library, and more.

The faculty advisor for UPE is Dr. Richard Burns. Contact him for more information. Learn more about the national UPE organization.