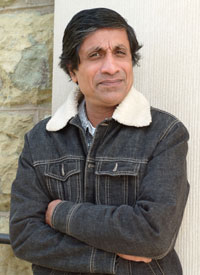 "Our moment in history demands that we all confront the crises of the day, particularly the poverty and under-development of more than one half of the globe. Some of these areas are just around our own neighborhoods."

Valerian DeSousa grew up and was educated in Bombay (now Mumbai) India, and as a young undergraduate student of economics became passionately involved in the social issues of the day. Today, he is deeply invested in working with researchers and students across the world on issues of globalization and development. He recently took a group of students to Mumbai and Pune in India to work on projects in the slums and with rescued street children, an experience that students found profoundly educational and life changing. He seeks to train students to be thoughtful intellectuals, cosmopolitan in the best sense of the word, and to work across cultures without being ethnocentric.

Dr. DeSousa developed an interest in labor issues as a consequence of his investment in equal rights, and earned a Masters Degree from India's premier institution on labor relations, and then worked for Hindustan Petroleum Corporation - one of the largest Government run petroleum companies in India - in the capacity of a labor relations officer. He subsequently studied at the University of Illinois at Urbana-Champaign where he settled into his professional identity as a sociologist. In Illinois, he also participated in the Unit for Criticism and Interpretive Theory, an inter-disciplinary program, that helped shape his research interests. According to Valerian, his love of culture and society, and curiosity about the rich and strange relationship between the two, is nourished by sociology. He considers sociology an ideal modern discipline suited for students who have a wide range of interests and don't wish to get into narrow specializations.

Following a PhD in Sociology, Dr. DeSousa has published on the relationship between labor and law, industrial relations in India, and post-structuralist theories of the subject. He is now involved in two long term research projects. He is looking at the way the World's Fairs of the nineteenth and early twentieth century used artifacts and visual material to represent empire and its colonies. He is also doing field work on call centre work in India within the framework of theories of globalization. He is most recently the editor of a collection of inter-disciplinary essays on an emerging field of study: New Modernity. His forthcoming collection in the Comparative Literature and Culture Web series of Purdue University Press is entitled, Enigma of Arrival: New Modernities and the Third World. His own contribution, "Modernizing the Labor Subject" discusses how British colonial policy in India reformulated the manufacturing process. As a researcher, DeSousa is a bibliophile, and very interested in finding rare and unusual writings on his topics of research, and thus compiled the bibliography for the volume.

A teacher who revels in the classroom setting, DeSousa constantly refines his views of contemporary sociology, and is currently working with a colleague in the Sociology department to revise some courses to include new media, and then to produce a text book that would reflect his ideas on contemporary sociology. At WCU he wishes to promote cross-cultural models of international development. He is active with the Institute for International Development, Ethnic Studies Institute, and the Frederick Douglass Institute.