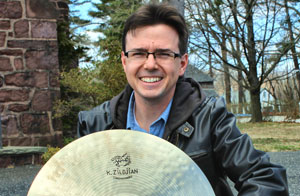 As a music educator...
I am a secondary level band director in The School District of Upper Dublin, marching band director at Wissahickon High School and an adjunct music theory and percussion instructor at Montgomery County Community College. I have also written two drumset method books with rock drumming legend Liberty DeVitto, titled Camp Jam: Rock Solid: Drums and I Used to Play Drums: An Innovative Method for Adults Returning to Play. Additionally, I have written a jazz improvisation series with famed saxophonist, Richie Cannata, titled Improvising and Soloing - In the Pocket. My latest release from Alfred Music is Sixty Second Solos, 2nd Runner-up in the 2015 DRUM! Magazine Readers Poll; the DRUMMIES.

As a composer...
My original orchestral composition Kaku, Kupala: Fear in Neutral Buoyancy, had its world premiere at Carnegie Hall this past September, commissioned and performed by the International Youth Philharmonic Orchestra, conducted by maestro Jose Luis Gomez.

Why did you choose WCU and/or the School of Music?
After visiting the school I knew it was the perfect fit for me. WCU offered a multitude of performance opportunities and is in a great location! So close to many of the nation’s cultural centers like Philadelphia, New York, Washington DC and Baltimore. The world class faculty and varied performance opportunities were also key factors in my decision to audition at WCU.

What training or education did the School of Music provide for you that relates to your current occupation?
I always wanted to be both a performer and music educator. The WCU School of Music curriculum showed that it is possible to do both, if you put in the time and hard work. Some other schools that I had looked into appeared to have different expectations of the education majors and the performance majors. WCU professors never did; they continually wanted the same level of excellence from all students. Excellence was always expected, in the concert hall, the practice studio or the classroom. This holistic approach to excellence has stuck with me and has helped elevate my performance level from all aspects of my music career.

What is a typical day like for you?
During the school year, Monday through Friday, I teach instrumental music, directing concert bands, jazz bands and in the classroom settings. A few nights a week depending on the season I might be leading a marching band practice, teaching a course at the community college, conducting private lessons or rehearsing for one the various groups that I freelance with in the Philadelphia area. On the weekends I am typically performing on drumset or percussion, anything from grandiose orchestral ensembles to playing with my jazz trio in a local club.

What advice would you give to someone who would like to enter your field?
Make sure that you absolutely love it, because just ‘liking’ it won’t get you much success. No one grades you on good intentions, so make sure that you’re always ready for ‘the call’. And it might be a bit corny, but I try to live by the words of Meredith Willson’s iconic character, Harold Hill, in The Music Man, "You pile up enough tomorrows, and you'll find you are left with nothing but a lot of empty yesterdays." If opportunities don’t come to you, go make your own.

What is your favorite memory of being a student at WCU and/or in the School of Music?
Well I suppose I could list tons of the great performances and teaching moments that had a lasting impact on me while an undergrad and masters level student at WCU, to be honest, the greatest thing that ever happened was meeting a fantastic percussionist in my senior year named Heather High. She’s still a great drummer, but her name is Heather High-Kennedy now, and we have a great life and four beautiful children!