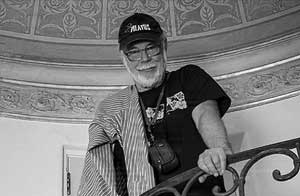 Why did you choose WCU and/or the School of Music?
My uncle, Roger Care, who went on to become an award-winning coach in the central Pennsylvania area, graduated from WCU in physical education. It was also recommended by my high school music teacher in the college prep program at Central Dauphin High School in Harrisburg.

What training or education did the School of Music provide for you that relates to your current occupation?
Going to West Chester after growing up in Harrisburg expanded my cultural and life horizons considerably. I have always been grateful for that and the support of some of my professors, particularly my piano teacher, Miriam Gottleib.

What is a typical day like for you?
As a writer and film music/animation historian I am currently working on a book on one of the major classic era Disney animation directors so I spend much time at my iMac. When I'm not on a writing project I work at editing my music (scores) into final revised versions in Finale. I also still have a part time position in the Ventura county library system and in my spare time I enjoy the music and other cultural resources of Los Angeles and Santa Barbara, particularly the magnificent LA Philharmonic.

What advice would you give to someone who would like to enter your field?
The fields of music and writing have changed so much since I started I hardly know what to say. I was first published because I was writing about rather specialized subjects, American film (and animation) music. Not a lot had been seriously written in that area at the time. (But now it seems everyone is doing it!)

I got my first job scoring short films because the director was familiar with my writing. So I would say just persist and try to find a niche.

What is your favorite memory of being a student at WCU and/or in the School of Music?
Strangely enough, being a movie buff, I felt like I was suddenly in an MGM college musical, such as Good News. I fondly remember the (pre-modernization) campus and the surrounding countryside being especially beautiful. I often enjoyed walking out to Baldwin's Book Barn for a break.

Probably my favorite memory is of having my first song cycle for voice, string quartet, and piano to poems of James Joyce performed in Swope Hall with five of my fellow students.