The Early Years of Marching Bands at West Chester University 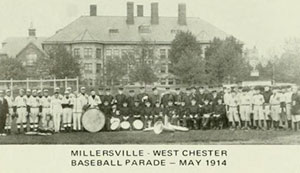 The first documented reference to a marching band at West Chester University of Pennsylvania can be traced back to the institution’s beginnings as a State Normal School. Russell L Sturzebecker’s Centennial History of West Chester State College notes, “The ‘Normal Band’ was organized on November 22, 1889, principally to furnish march music for a military company composed of students…this group would be the predecessor of the famous West Chester State College Marching Band of contemporary times.”

Over the next several decades, the band could be found supporting school activities by performing in local parades on campus and around the community. Sturzebecker notes “The Millersville baseball game on the 2nd of May [1914] was the occasion for a parade by the band and student body,” and “Professor Ed Zimmer’s band [of 1925] lent atmosphere to the football games.” 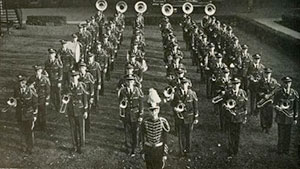 As West Chester Normal School transitioned to West Chester State Teachers College in 1927, the marching band too began to mature. In the 1930’s, S. Powell Middleton assumed leadership of the group. New military style uniforms and the growth of the band to more than 50 members gave the ensemble a more traditional appearance. Although membership in the band was limited to men, the introduction of a “Girl’s Trumpet Corps” during this period became a fixture for several years and is said to have added “considerably to the effectiveness of the group.”

Following World War II, the band grew from fifty to sixty-five members as Mr. Paul Carson and Dr. Alexander Antonowich shared the directorship. The exposure gained from accompanying the strong football teams of the 1940’s helped the band to develop a national reputation. During the 1947 season, the band accompanied the football team to its first bowl appearance in the 1947 Burley Bowl on Thanksgiving Day in Johnson City, Tennessee and later the 1948 Cigar Bowl in Tampa, Florida on New Year’s Day. Even on difficult days for the team, the band helped restore some pride to the university. ”To the student body of West Chester University the football game of 1949 against rival University of Delaware ‘was a matter of honor.’ The victor in the game was the Carson-Antonowich led West Chester Marching Band. Undefeated, untied and unscored upon, their record is still intact.”

Mr. Richard Boerlin assumed leadership of the band in 1966. In 1968, the band accompanied the football team to the Tangerine Bowl in Orlando, Florida.

Dr. James R. Wells Establishes West Chester as a Leader in the Activity

The early 1970’s were a time of great change and growth in the marching activity. Curvilinear drill design came into fashion, rifle squads formerly restricted to honor guards began to spin and toss these weapons, and corps style’ marching slowly began to replace traditional high stepping and variations of chair step techniques. Dr. James Wells was hired as Director of the Golden Rams Marching Band in 1968. Under his leadership, the band freely embraced these new trends and established its reputation as an innovator within the activity.

The Golden Rams Marching Band swelled to more than 200 members, an all female color guard was added in 1970, women were admitted to the band for the first time in 1974, and marquis performances such as the invitation to perform at the 1970 AFL Championship Game at Shea Stadium helped create national exposure for the Golden Rams. 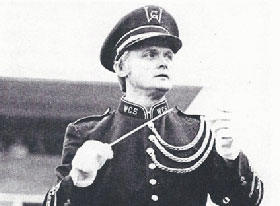 Wells also inspired a tradition of leadership at the college and firmly established West Chester as a destination for education within the activity. In the summer of 1970, James Wells founded the West Chester University Marching Band and Band Front Conference. This annual workshop created a forum for directors to develop more effective teaching techniques, engage in discussion with leaders in the field and was the precursor to landmark programs such as the George N. Parks Drum Major Academy and Band Leadership Training Programs. West Chester University has hosted this annual workshop each summer to present day.

As the greater institution was christened West Chester University in July 1983, the marching activity continued to develop and the Golden Rams Marching Band continued its role as an innovator throughout the 1980s. The addition of a front ensemble of concert percussion instruments, the incorporation of asymmetrical drill into show design and the refinement of roll-step marching were all embraced at this time. It was also at this time that the West Chester University Golden Rams Marching Band begins to use the additional, self-imposed moniker, Incomparable. In November of 1986, the Incomparable Golden Rams Marching Band marched in the Macy’s Thanksgiving Day Parade in New York City for the first time.

Dr. John Villella, West Chester State College alumnus and Assistant Director under James Wells, assumed leadership of the Incomparable Golden Rams Marching Band in 1992. Under his direction, the band grew to more than 300 members and the color guard saw a peak membership of more than 70 members. As the band’s reputation for excellence and outstanding performances continued, the group enjoyed invitations to NFL games, the Philadelphia Thanksgiving Day Parade, and served as featured performers during the Philadelphia Phillies World Series appearances. The Golden Rams Marching Band’s image as innovator did not yield as the color guard began wearing themed costumes instead of traditional uniforms and the use of props were incorporated into show design.

Expanding on the concept of the Marching Band and Band Front Conferences established by wells in the 1970’s, Villella established Vivace Productions, Incorporated, a company whose mission seeks to provide Band Leadership Training programs for students and teachers throughout the United States. The flagship conference has remained at West Chester University for almost 50 years. Villella also established the College Marching Band Festival in the fall of 1996. This annual exhibition of college bands has grown from eight to more than twenty marching bands in its twenty-two-year history. 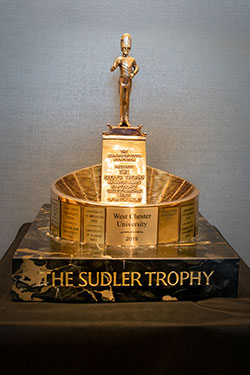 Dr. Andrew Yozviak was hired as Marching Band Director in 2007 and continued the tradition of excellence firmly established by his predecessors at West Chester University. While under Dr. Yozviak’s stewardship, the Golden Rams Marching Band continued to build on its reputation as a national leader in the marching arts. The band returned to the Macy’s Thanksgiving Day Parade in 2015, and the finale of its performance was included in television advertisements leading up to the same event in 2016. The group also became a regular fixture at Bands of America events during Yozviak’s tenure. Featured exhibition performances at the 2009 Grand National Championships, 2014 Atlanta Regional Championship and 2016 and 2012 Pittsburgh Regional Championships solidified a strong relationship with the organization. The West Chester University Incomparable Golden Rams Marching Band has been featured in video presentations at the College Band Directors National Association National Conference in 2017 and 2013 as well as the East Division Conference in 2016 and Athletic Band Conference in 2016 and 2015.

In 2018, Adam Gumble was hired to assume the role of Director of Athletic Bands at West Chester University. Along with Associate Director of Bands M. Gregory Martin, Gumble continues to embrace the band’s rich tradition of education, innovation, and inspiration. In his first year as Director of Athletic Bands, the West Chester University Incomparable Golden Rams Marching Band performed in featured exhibition at the 2018 Bands of America Grand National Championships and was named the recipient of the prestigious Sudler Trophy in 2019.