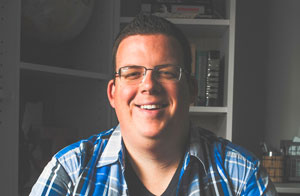 Why did you choose WCU and/or the School of Music?
So many of the great percussion and musical entrepreneurs I admired as a young high school student had studied or worked for West Chester University. As someone who knew early on they wanted to carve their own career path in music, especially the marching arts, as someone from the Philadelphia area, WCU made perfect sense to be the next step in that evolution.

How has the quality of education you received from WCU and/or School of Music prepared you for life after graduation?
I never graduated - opting instead to begin freelancing and learning "in the field". As a music education major who wanted to explore non-classroom education and arranging in a niche area of music, it made sense for me to continue my education through gaining experience. I moved around the country creating my own "internships" seeking the mentorship of people I admired that had been successful in my field. That being said, the fundamentals ingrained in me at the Wells School of Music were of the utmost importance to my success. Every success I've had is built on that foundation in some way.

What is a typical day like for you?
I try to stick to a very consistent routine between travel work. I like to wake up early, get a quick work out, breakfast, and shower before beginning my work. I work from my home office for usually 8-10 hours/day depending on my workload. I try to get out and run errands in my neighborhood and some point in the day to give myself a break and a chance to walk around in the fresh air. Sometimes in the afternoons/evenings,‚Äã I travel out of the city to local rehearsals, like for the WCU Incomparable Golden Rams Marching Band!

What advice would you give to someone who would like to enter your field?
1. Make as many positive connections as you can. They will come back to benefit you in completely unexpected ways. Every interaction you have with another human is another chance to make a deposit in a relationship bank account that will pay dividends back to you.
2. Give people more than they expect. Get something done early. Do more than they ask. Find thoughtful ways people to know you care about them.
3. Listen more. Think more. Love more.

What advice would you give to our graduating seniors?
Be passionate about what you do with your life. The paper you will frame and hang on your wall will only get you so far. Only you have the power to create your own success.

What makes the WCU School of Music standout to you?
The Wells School of Music is a special institution, built on the backs of giants, and elevated by the successes of those who have passed through its halls and studied in its classrooms, only to be further elevated with each new class of students that will go on to make their mark in the music world. I couldn't be more proud to play a small role in that legacy.

What is your favorite memory of being a student at WCU and/or School of Music?
My favorite memory of being a student of the Wells School of Music isn't one particular moment, but rather the feeling and sensation of being fortunate to live a life in the discovery and exploration of music. Being able to dedicate myself to an art of humanity through my own growth was one of the greatest experiences and times of my life.

What's the most interesting thing about you that we wouldn't learn from your resume alone?
I was once a Walt Disney World Monorail Pilot during my time in the Disney College Program. Every day was like being on vacation and I had the incredible opportunity to make magical memories for children of all ages. It was a really fantastic time in my life!