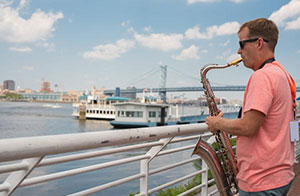 Why did you choose WCU and/or School of Music?
I remember that day very well. It was October 1983 of my senior year in High School. I was sitting in AP Bio class when I decided I did not want to go to Dental School (a dream from 2nd grade) and wanted to study Music. To be honest, reading text books about ventricles and corpuscles was a complete drag. I couldn't picture myself doing this for the next 8 years. Practicing and playing music for hours came easy, was a passion and clearly presented itself as the path to follow. The search was then on for the best Music Ed program I could find. I knew I wanted to find a school that had a superior Music Ed program, and, was close enough to the city to gig. WCU clearly stood out as the choice. I applied, had my audition, and was accepted by November.

How has the quality of education you received from WCU and/or School of Music prepared you for life after graduation?
I am so thankful for my Theory and Ear Training classes. The classes have proven to be the most valuable of all of the classes I took WCU. There isn't a day that goes by that I don't use the information and training from these classes.

What is a typical day like for you?
Well... since I work at a Middle School I can say there is no typical day. Middle School kids keep you on your toes. The one thing Middle School kids are consistent with is being inconsistent. Not in a bad way, just, never the same day twice. Outside of school I gig with many local Philadelphia singer/songwriters and have played with Simon Kirke (Free and Bad Company) and did a run of shows with the Beach Boys recently. I have had a day where I start in school with band at 7:30am and end the night playing an auditorium in front of thousands. Nothing like a dose of reality at 7:30am the next day to keep you grounded! I have also been doing more recording sessions lately, and it is still a cool thing to record something, forget about it, and then hear it months later on the radio. That thrill NEVER gets old!

What advice would you give to someone who would like to enter your field?
Never stop learning.

What advice would you give to our graduating seniors?
One day at Elementary Methods class was told the we would need to fight to justify our jobs in the future. I remember thinking "Nah... that will never happen". Well... more than ever, the fight is real and if you're not ready to fight for your art, go into accounting.

What makes the WCU School of Music standout to you?
When I was at WCU there was an attitude (chip on their shoulders) with the professors that there was a need to over achieve since we were a state school. In education today one of the buzz words is "rigor." Rigor was a way of life at the WCU School of Music. To do it right required at least 18 credits a semester and thick skin. I wouldn't want to do it any other way, or, be treated any other way. I felt I was far more prepared than most students graduating from other programs.

What's the most interesting thing about you that we wouldn't learn from your resume alone?
I love to surf... I’m a weather nerd... and I'm preparing to run a marathon in January.