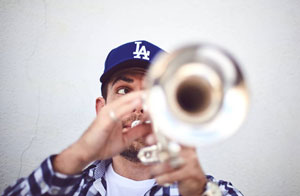 Why did you choose WCU and/or the School of Music?
I enrolled to WCU initially as a music ed major since it had such a great reputation. I played trumpet in marching band and marched drum corps, and thought I was going to be a high school band director. While in school, I became interested in composing, and after being heavily recruited by the Theory & Composition department (love those guys...hahaha), I decided to switch majors my junior year.

How has the quality of education you received from WCU and/or School of Music prepared you for life after graduation?
I value my music education from WCU so much. The first time I appreciated it was when I went to grad school and realized how strong my theory and history education was compared to my peers. Since then, I feel like everything I needed to learn about music in an academic setting came from my time at West Chester. I can't say this is true for everyone, but when you go to grad school, you either learn the same stuff, or study more esoteric music that was probably left out of your undergrad curriculum for a reason.

What is a typical day like for you?
I don't necessarily have typical days, but it almost always involves picking up the trumpet. Any day I could be performing, arranging horn charts, scoring a film, recording for an artist or producer, composing for high school ensemble, teaching a lesson, or simply catching up on calls or emails.

What advice would you give to someone who would like to enter your field?
If you're a young composer, PLAY YOUR INSTRUMENT. One of the biggest mistakes I made was taking six years off the trumpet to focus on composing and film scoring. Not only does performing inform you as a composer, but it's the easiest way to make some money as a freelance musician. Also, people I've met as a trumpet player have also hired me to compose and arrange for them, so one hand feeds the other.

What advice would you give to our graduating seniors?
Play your instrument and move to New York or Los Angeles where there are the most opportunities. I'm not saying you can't make a living as a musician in another city, but the opportunities are smaller and you'll be competing with older, more established musicians who have already cornered the market. In Los Angeles, if you're really good, you'll be able to find work.

What makes the WCU School of Music standout to you?
I believe that the theory/comp faculty are among the best in the country. They know how to teach and they know how to make you a better composer. I'm also proud to consider some like Robert Maggio and Mark Rimple friends to this day.

What is your favorite memory of being a student at WCU and/or School of Music?
Just the friendships I made while I was there. Such a great community.

What's the most interesting thing about you that we wouldn't learn from your resume alone?
I'm learning to speak Spanish and salsa dance. Last year, I toured with two big Mexican artists, Gloria Trevi and Alejandra Guzman, and I fell in love with Latin culture. Me encanta!