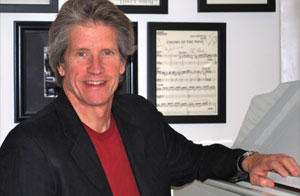 Why did you choose WCU and/or the School of Music?
I selected WCU because it was recommended to me by music teachers in my home town of Norristown, PA. It would be more affordable than other institutions, since I was paying most of my own bills through musical employment in church accompanist positions and playing with bands for private events. WCU had a strong music education Program that my mentors suggested, as a backup employment possibility , if my career goal as a professional musician did not work out.

What training or education did the School of Music provide for you that relates to your current occupation?
I received a very fine musical education at WCU though my piano lessons with Dr. Pennington, organ lessons with Dr Wilkinson, theory classes with Dr. Jim Sullivan and with many other professors who helped to further develop my musical skill.

What is a typical day like for you?
No day is typical for me, although I might teach from 9am- 4pm and then conduct a show at the Wynn Hotel, in Las Vegas, from 730-9p 6 nights per week. I also fly to Los Angeles from Las Vegas, where I reside, every couple of weeks to play on the soundtracks to television shows including Family Guy and American Dad at Fox Studios for my friend and composer, Walter Murphy, who I have worked with since the early 1980s. I also travel and conduct orchestras and play piano for my longtime friend, Ben Vereen,in concerts throughout the world. In addition, I compose music for PBS television documentaries and arrange and compose for many musical artists.

What advice would you give to someone who would like to enter your field?
I would advise them to obtain the highest level of proficiency on their respective instrument in a variety of musical styles, develop a superior musical ear and embrace a keen sensitivity to all genres and styles of music in order to have more marketable skill as both a performer and music educator. In addition, it is of upmost importance to become an excellent arranger, orchestrator and composer in all styles of music if one is to succeed in the music business. An aspiring musician should also develop exceptional musical sight reading ability and conducting proficiency. It is of upmost importance to develop strong interpersonal skills to cultivate relationships and networking opportunities in the music industry. In order to become an outstanding music educator, one must garner essential methods and techniques in musical instruction to assist students in their learning process.

What is your favorite memory of being a student at WCU and/or in the School of Music?
I have many wonderful memories of my years at WCU but particularly remember performing the first movement of Ravel's G Major Piano Concerto with The West Chester University Symphony Orchestra, directed by Dr. Jacque Voois. My piano instructor, Dr. Karl Pennington, recommended this piece probably because of the jazz influence that Ravel incorporated after the composer had become friends with George Gershwin. Dr Pennington thought that my interest in jazz would help me to perform this piece with authenticity and his idea came to fruition with my performance of this work in the honors concert. Dr Voois's son, a classical cellist who was in the elementary music class I instructed during my student teaching, influenced his father to listen and enjoy more American Jazz music after my interaction with him. I also cherished memories of playing many concerts with the student-run jazz band, The Criterions, which was one of my first experiences in playing in a large jazz ensemble. My best friend and roommate, David Kenney, saxophonist and music Ed major, would spend many hours with me in the Swope practice rooms playing duets utilizing jazz standards which prepared me for my eventual career as a top professional jazz pianist.