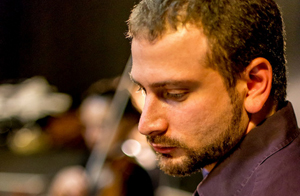 Why did you choose WCU and/or School of Music?
To me, WCU was just a great fit. I had my interview with the beloved Dr. Sprenkle, who sold me on the strength of the music ed curriculum, the quality of our professors, and the investment of New Swope, which opened during my second semester at West Chester. I received a few academic and music scholarships that made the University quite affordable for me and my family, and was also accepted into the Honors College. West Chester was far enough away from my hometown of Reading, PA to be "out on my own," but close enough for my parents attend any concerts or campus events.

How has the quality of education you received from WCU and/or School of Music prepared you for life after graduation?
While I am not teaching in a traditional setting, my background in music education has helped me immensely as a theatrical music director. I work on a lot of "29-hour readings" of new shows, where a cast needs to learn a brand new musical in just five days. I'm consistently being told by my colleagues how efficiently and effectively I teach a score, relative to my peers. And while I may not play a ton of advanced classical piano repertoire anymore, I still live behind a piano most days, and sight-read a great deal. My music history and theory classes have given me a better vocabulary and context to coach singers for the musical theater, both privately and as an accompanist for classes at NYU and The King's College. I've also worked extensively with the education departments of the Barrington Stage Company and the Goodspeed Opera House, two of the most prominent regional theaters in the Northeast.

What is a typical day like for you?
If I am in the City, no day is typical, but usually involves some bike riding to and from Manhattan, playing a rehearsal or class, and inevitably running into friends and colleagues in the theater district. I often work from home, as well, writing arrangements, or creating rehearsal tracks. When working on a full production, I either follow an eight-hour rehearsal day, or the theater's given performance schedule.

What advice would you give to someone who would like to enter your field?
Take on as many opportunities as you can, with as many different people as you can. Referrals go a long way, and artistic communities are smaller than one would think.

What advice would you give to our graduating seniors?
While auditions may crop up from time to time, employers and colleagues will likely assume that you are competent enough to do a given job. Instead, be someone they'll want to work with, on a human level.

What makes the WCU School of Music standout to you?
Its faculty and facilities. As a pianist, our all-Steinway school ensured a level of quality and consistency that I probably took for granted at the time. My professors were excellent, across the board, caring deeply about both their students and their subject areas.

When you were a student at WCU, did you complete an internship and/or study abroad?
With WCU, I was lucky enough to travel to Vienna—twice! Dr. Sterling Murray took about a dozen music history students with him, following my first year; I returned two years later with Dr. Anne Gross and Professor Randall Scarlata. We took classes in German, and soaked in the rich musical history of the city.

What is your favorite memory of being a student at WCU and/or School of Music?
While at West Chester, I was a four-year veteran of WCU Vocal Jazz, and with the support of Dr. Jane Wyss, I arranged a piece for us to sing every semester. During my junior year, I applied for a grant through Pi Kappa Lambda to get Darmon Meader, the tenor and arranger of the famed New York Voices, to critique my arrangements and coach our ensemble. That was pretty special. Playing the Shostakovich Concerto for Piano (Op. 102) at my senior recital with Dr. Vincent Craig was also a highlight, for sure.

What's the most interesting thing about you that we wouldn't learn from your resume alone?
While working at the Goodspeed Opera House on the Connecticut Shoreline, I became very active in the local Sea Music community, and am now a proficient concertina player. On the third Sunday of every month, you can find me at the Noble Maritime Museum in Staten Island, singing chanteys and drinking a Brooklyn Lager.