The Edmundo Morales collection contains ethnographic hats and headresses from the Indigenous peoples of the Andes. Dr. Morales, professor emeritus of sociology, collected these items over a five year period, with the objective “to document traditional hats in Bolivia, Ecuador, and Peru that may no longer be extant in a few decades with the aggressiveness of the modern world.” Hats and headdresses are iconic elements of Andean social history and culture. Extensive archaeological remains of headdresses show their prominence before and during Inca dominance, as well as during colonial times. Warriors would wear hats as status symbols from the 4th to 10th centuries, and some were even buried with their owners. Weaving expressive caps with the corners embellished with tassels and peaks, hatters of the ancient Andes were artisans of great sophistication, flair, and genius. This has continued into the modern era, as hatters have taken Western motifs and made them their own. But globalization also may lead to the eventual decline of this practice. Thanks to better infrastructure, more mobility, and new media sources, younger generations are adopting the attitudes and styles modeled by urban culture, switching out the traditional wool hats for polyester-blend baseball caps made cheaply abroad. This stands in stark contrast to traditional ways of production and consumption; Morales argues that cultural changes in the Andes are more dramatic because of the simpler ways of life compared to the rest of the continent. The eye-catching hats in this collection, he writes, are the pieces of indigenous clothing that surrender first to globalization.

The result of his work was an a published monograph: Indigenous Andean Hats and Headdresses: Tradition, Identity and Symbolism (West Grove, PA: Alpamayo Photography and Publishing, 2012). 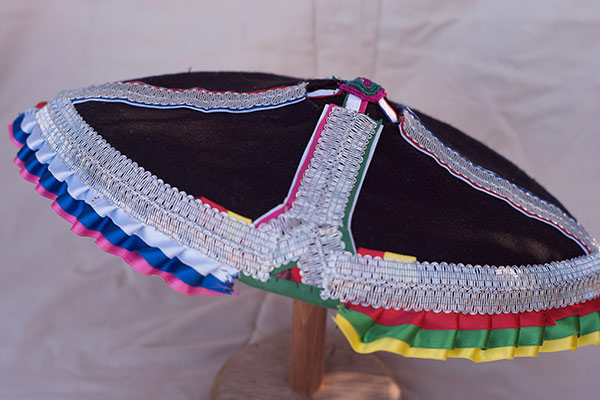