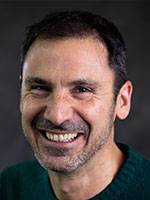 The Wells School of Music is a dynamic and creative environment. As a composer and a professor, I'm inspired by all the amazing colleagues and students I interact with on a daily basis, whether it be in the classroom (teaching composition and theory) or at ensemble concerts and recitals. I have always enjoyed coming to "work" because it has always felt like an advanced form of "play," which is to say that I feel lucky that my job is to spend my day doing things that I enjoy and care about deeply in a place where the students and my fellow teachers are similarly engaged and enthusiastic about their shared passion-music.

As a composition and theory teacher, my mission is to best prepare my students for a professional career in music. Many of our composition and theory students have gone on to graduate study at some of the best schools in the country. From there, they have been able to secure college-level teaching jobs, receive commissions for new works from all kinds of ensembles, and live happy and productive lives in the professional world.

Bling, a new musical, book and lyrics by Matthew Hardy, 2012

Robert Maggio: "Rain" From RAIN AND ASH (String Quartet No. 2)

Robert Maggio: "He Needs Me" From SHALL WE DANCE?