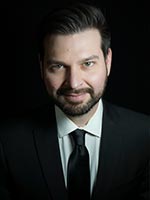 His operatic engagements include performances with Musica Viva Hong Kong, Indianapolis Opera, Kentucky Opera, San Diego Opera, Dicapo Opera Theatre, and Bronx Opera. As a soloist, he has appeared with the Sioux City Symphony, the South Dakota Symphony, the China National Symphony Orchestra, the San Diego Symphony Orchestra, and the Thailand Philharmonic. As part of an Abraham Lincoln bicentennial concert, Nicholas portrayed a young Lincoln in scenes from a new opera at the Kennedy Center in Washington, D.C.

Nicholas' many roles include Silvio in Pagliacci, Danilo in The Merry Widow, Dandini in La Cenerentola, Marcello and Schaunard in La Bohème, Belcore in L’elisir d’amore, the Father in Hansel and Gretel, Enrico in Lucia di Lammermoor, and Eisenstein in Die Fledermaus.

Nicholas’ recordings include the roles of Eisenstein in Die Fledermaus, and Beau Braxton in the world premiere of Thomas Pasatieri’s God Bless Us, Every One, both released by Albany Records. As a member of the Pro Arte Singers, he is heard on William Byrd: The Three Masses, on the Harmonia Mundi label.

Nicholas is an active recitalist, most recently performing in Columbus, Ohio as part of the Ohio Song Project, and in Austin, Texas. He has also appeared at the Bangkok Art and Culture Centre, and Sala Sudasiri Sobha, in Thailand. In 2016, he won Third Place in the Art Song/Oratorio division of The American Prize, and won the Hawaii Public Radio Art Song Competition in 2013.

An enthusiastic educator, Nicholas joins the faculty of West Chester University of Pennsylvania in 2020 as Assistant Professor of Voice and Opera, and Director of West Chester University Opera Theatre. He previously served on the faculty of the University of South Dakota, Eastern Illinois University, and Mahidol University in Thailand, where he was Chair of the Classical Voice Department. He has been a guest teacher and performer at Idyllwild Arts Academy in California, Payap University and Burapha University in Thailand, the Myanmar Institute of Theology, and the Asho Chin Thelogical Seminary, in Myanmar.

Nicholas received both his Bachelor’s and Master’s degrees from the Jacobs School of Music at Indiana University, studying with Giorgio Tozzi. In 2012, He completed a Doctor of Musical Arts degree from the University of Kentucky, where he studied with Dr. Everett McCorvey