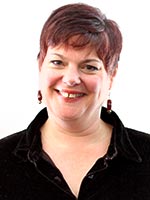 Emily A. Bullock, Mezzo-soprano and Professor of Voice and Opera: has appeared with Nashville Opera, the Colorado Symphony in performances of Bach's Magnificat and Handel's Messiah. She has performed Beethoven's Ninth Symphony with the Boulder Philharmonic and with Belmont University, Bach's St. Matthew Passion with the Littleton Symphony; Mahler's Kindertotenlieder, Lieder eines fahrenden Gesellen, and Schönberg's Brettl-Lieder with the Boulder MahlerFest; Bach's Magnificat with the Boulder Bach Festival; and Amy Beach's Mass in E-flat with the Boulder Chorale. Additional performances include Schönberg's Der hängenden Garten, Pierrot Lunaire, and Das Lied der Waldtaube; and Berio's Folk Song arrangements.

Ms. Bullock has performed with Nashville Opera, the Marlboro Festival, the International Gilbert and Sullivan Festival in Buxton, England, Tulsa Opera, the Enid Symphony, the University of Colorado Lyric Theatre, the University of Tulsa, and the Gilbert and Sullivan Society of Oklahoma include Isabella in L'Italiana in Algeri; Mrs. Maurrant in Street Scene, Augusta Tabor in The Ballad of Baby Doe; Ma Moss in The Tenderland; the Queen of the Fairies in Iolanthe; the Duchess of Plaza-Toros in Gondoliers; Katisha in The Mikado, Madame Armfelt in A Little Night Music; Baba in The Medium; the Mother in Amahl and the Night Visitors; Mad Margaret in Ruddigore; the Witch and the Mother in Hansel and Gretel; Mrs. McLean in Susannah; and Anina in La Traviata, Prince Orlovsky in Die Fledermaus, Berta in Il Barbiere di Siviglia, Mamma Lucia in Cavalleria Rusticana, and Idamante in Idomeneo.

Ms. Bullock has performed solo recitals in Tennessee, Colorado, Oklahoma, and Illinois, including a recital for the Colorado Music Festival, and is a frequent performer with the Colorado Chamber Players. Additional performances include appearances with LyricFest, the prestigious Marlboro Festival, and a recording of Samuel Barber with the Russian Philharmonic Orchestra.

In July of 2010, Dr. Bullock was awarded Best Director for her production of The Sorcerer with the International Gilbert and Sullivan Festival.

From "The Gondoliers" performed by the Gilbert and Sullivan Society.