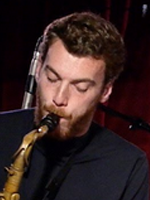 Jonathan Ragonese, composer-arranger-saxophonist, is a native of New Cumberland, Pennsylvania. He is the Director of Jazz Studies and Saxophone Professor at the Wells School of Music at West Chester University. As a saxophonist he has performed and recorded with a wide array of musicians including Steve Wilson, David Liebman, Jon Faddis, The Sirius Quartet, Gideon Alorwoyie, the Harrisburg Symphony Orchestra, Tim Warfield, Tin Can Buddha and Steve Rudolph. As a composer his works have been commissioned and premiered by The New York Film Festival, saxophonist Steve Wilson, Jazz @ Lincoln Center, The Museum of Modern Art, the Vermont Mozart Festival Orchestra, the Harrisburg Symphony, the The Righteous Girls, Bucknell University, Messiah University, West Chester University and the Harrisburg Youth Symphony. Pandora's Box, a new film score for G.W. Pabst's iconic film, was commissioned by the Film Society of Lincoln Center and premiered at Alice Tully Hall in October of 2017, with Jonathan conducting a 17-piece ensemble. In 2014 Ragonese premiered his ‘Not-this' for two saxophones, at Carnegie Hall. His Concerto for Saxophone and Wind Ensemble was premiered in 2021, and in April of 2022 portions of letters from an unknown woman to an unknown people, a double concerto for Trumpet and Marimba was premiered by William Stowman and the Messiah University Symphony Orchestra. Active educational endeavors include lectures, writings, and the development of Music Before Words, a music program for infants with educator Renee Bock. His first recording, Ardent Marigolds, was released in 2013, a duo with musical father Steve Rudolph. two men, singing, a duo album with saxophonist Tim Warfield was released the summer of 2018. For more information, visit: www.jonathanragonese.com