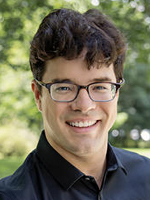 Sought after as a teacher, chamber and orchestral musician, Domenic Salerni is the first violinist of the Dalí Quartet, on faculty at West Chester University, the Arts and Community Network (ArCoNet), and the Dalí Quartet International Music Festival. He is a member of the multi-genre septet Foundry, the Chiarina Chamber Players, IRIS Orchestra, and the Bellingham Festival Orchestra.

After graduating with honors from the Cleveland Institute of Music, Salerni went on to study at the Yale University School of Music where he won the Yale Chamber Music Society competition and the Phyllis Curtin Career Entry Award. He was a finalist and laureate of the first inaugural M Prize at the University of Michigan in 2016, a laureate of the 2009 International Sion-Valais Violin Competition, and a semifinalist in the 2015 Schadt International Violin Competition.

Domenic can be found on a number of recordings including the Dalí Quartet’s Classical Roots, Latin Soul CD, Andy Akiho’s debut album No One to Know One, Gary Motley’s album Departures, his father Paul Salerni’s album Touched: A Decade of Chamber Music, and his own self-produced album Atmospheric Lines.

Highlights from this past season include performances with the Dalí Quartet at the National Gallery and Puerto Rico’s Centro de Bellas Artes, collaborations with omnivorous bassist, composer, and CAG competition winner Sam Suggs and mezzo-soprano Elspeth Davis in performance of the Juliet Letters presented by Musicians of Yellow Barn’s Music Haul. In addition to his freelance work this season with The Philadelphia Orchestra, Harrisburg Symphony, and Annapolis Symphony, Salerni also performed with the Chiarina Chamber Players in the final concert of their third season, and joined the League of Composers for recording projects and performances.

Domenic looks forward to a robust touring schedule this season with the Dalí Quartet, which includes a US and Canadian tour with pianist Olga Kern, and performances and a recording project with clarinetist Ricardo Morales. As part of the Dalí Quartet residency at West Chester University, Salerni will be a featured faculty soloist with the West Chester University Orchestra and will appear in his first faculty recital with guest pianist Efi Hackmey, as well as chamber music collaborations with WCU faculty.