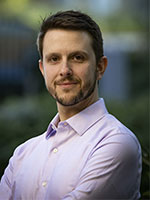 Praised for his “enormous soul and a big, vibrant sound,” (The Reading Eagle), violinist Ari Isaacman-Beck is a captivating and multi-faceted artist whose solo and chamber music performances have taken him all over the world, to venues such as Jordan Hall, the Kennedy Center, Zürich’s Tönhalle, and Amsterdam’s Concertgebouw. An award-winning violinist, he was the 2016 winner of the Lili Boulanger International Competition, won second prize in 2006 at the Sion-Valais International Violin Competition, and received the prize for the best performance of the commissioned work, Thomas McKinley’s Dialogues, at the 2017 Elmar Oliveira International Violin Competition.

As of the fall of 2020, Isaacman-Beck is proud to be the first violinist of the Dalí Quartet, in residence at West Chester University. With the quartet, he is ecstatic to study and promote the traditional string quartet canon alongside lesser-known works by Hispanic composers. From 2009-2016, he performed in North America, Europe, and China as the violinist of Trio Cleonice, an award-winning piano trio described by the Boston Globe as “abundantly sincere and absorbing.” With the trio, he was a top prize winner at the 2014 Alice and Eleonore Schoenfeld and Chamber Music Yellow Springs competitions and received the John Lad Prize from Stanford University at the discretion of the St. Lawrence String Quartet.

A committed educator, he was on the faculty of the Sunderman Conservatory of Gettysburg College from 2017-2020 alternately as the Visiting Assistant Professor of Violin and Interim Director of Orchestras; he also completed a teaching and performing residency at the University of North Carolina at Chapel Hill in September 2019. He has previously served on the faculties of the Kinhaven Music School, Yellow Barn Young Artists Program, New England Conservatory’s Preparatory Division, Rivers Conservatory, and Junior Greenwood Music Camp. Additionally, he has presented masterclasses at the Eastman School of Music, Oberlin Conservatory, Bucknell University, the University of Hawaii, and Husson College. He received degrees from the Cleveland Institute, Juilliard, Mannes, and New England Conservatory; his teachers have included Donald Weilerstein, Ronald Copes, Mark Steinberg, Laurie Smukler, David Updegraff, and Mary West.