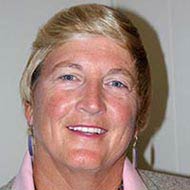 Dr. Eve Atkinson is the Graduate Coordinator of the Master of Public Administration (MPA) in Sport and Athletics and Professor in the Department of Kinesiology. She has served as Professor since 2001 in the Pennsylvania State System of Higher Education (PASSHE). Prior to returning back to the Philadelphia area, Dr. Atkinson was the first women appointed in the United States as Director of Athletics of a Men’s and Women’s NCAA Division I program with NCAA Division I-AA football. This appointment was for over 11 years at Lafayette College where she was at the forefront of the design and construction of the $24 million, 110,000 square foot, Allan P. Kirby Sports Center, an Athletic Business Facility of Merit Award winner.

At Temple University, Dr. Atkinson served for six years as Associate Director of Athletics and earned her doctorate in Physical Education with a concentration in Sport Administration in 1991.

While at Temple, she instituted a drug and alcohol awareness program for student-athletes that included drug testing which was one of the first on the collegiate level in the United States. Dr. Atkinson wrote an article entitled, “A Drug Awareness Program is Preventive Medicine,” which explained the details of Temple’s state-of-the-art DETER program and the article was published in Athletic Administration magazine. Additionally in that area, Atkinson presented her doctoral dissertation research entitled, “A Case Study of Cocaine Usage by Student-Athletes and Substance Abuse Programs for Student-Athletes at NCAA Division I-A Universities,” at a symposium on Sports Medicine for Physicians at the University of Kentucky School of Medicine. Also, Dr. Atkinson was an expert witness for the United States House of Representatives Select Committee on Narcotics Abuse adn Control on Capitol Hill in Washington, D.C.

On the coaching front, Dr. Atkinson was Head Coach of Women’s Swimming at Yale University, the University of Massachusetts – Amherst, and Temple University. At Yale, her teams ranked consistently in the country’s Top Ten, won the Ivy League Championship and several swimmers garnished Division I All-Americans status. While coaching at these NCAA Division I universities, she also taught theory courses in Physical Education. Dr. Atkinson also holds several additional teaching certifications from the American Red Cross.

Dr. Atkinson received her B.S. and M.S. in Health and Physical Education from West Chester University where she was a 12 time All-American swimmer and also played varsity field hockey and lacrosse. It is a thrill every week for Dr. Atkinson to teach in the same swimming pool where she won several championship titles and now has the grand opportunity to teach students how to teach aquatics. She views this as a dream come true and thoroughly enjoys teaching graduate and undergraduate courses at her alma mater.