Mission Statement of the Collaborative

In pursuit of Frederick Douglass’ commitment to American democratic ideals and educational excellence, the Pennsylvania State System of Higher Education’s Frederick Douglass Institute will serve as a catalyst for participating universities to enhance their curricula and enrich their campus climate.

In this endeavor, The Frederick Douglass Institute at West Chester University will function as a resource and a link among participating universities.

The PASSHE Frederick Douglass Collaborative has a public mission and vision. The Collaborative exists to serve as a catalyst to enhance diversity in curricular and co-curricular offerings, among the students and faculty at PASSHE institutions. Our goal is to prepare Pennsylvania’s students for the 21st century by encouraging and supporting intercultural literacy and knowledge that are required of them as citizens of the Commonwealth and the world. 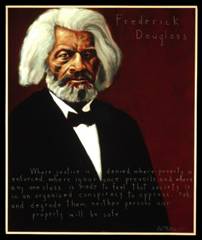