A Series of Events with Professor Robert S. Levine

The director of WCU's Fredrick Douglass Institute (FDI), Dr. Chris Awuyah, and its board have planned a series of events to celebrate FDI's 25+ years anniversary. University Distinguished Professor of English and Distinguished Scholar-Teacher at the University of Maryland, Dr. Robert S. Levine will deliver the celebration's keynote address, "Impeachment: Frederick Douglass and Andrew Johnson after the Civil War," followed by a book signing and then an informal conversation with Dr. Levine, WCU students, faculty, and guests. Dr. Levine draws his talk from his most recent monograph, The Failed Promise: Frederick Douglass, Reconstruction, and the Impeachment of Andrew Johnson (W.W. Norton, 2021; author's page).

The work has already received much acclaim:

"In this engrossing new book, Robert S. Levine has penned a nuanced and detailed study of the ‘hopes and frustrations of Reconstruction' during Andrew Johnson's presidency. While focusing on the relationship between Johnson and Frederick Douglass, the author also includes the views of numerous African American writers who witnessed Johnson's transformation from self-styled ‘Moses to Black People' to betrayer of Reconstruction.The Failed Promise is a lesson for our times as we continue to confront our nation's unfulfilled promise of racial equality."
— Henry Louis Gates, Jr., author of Stony the Road: Reconstruction, White Supremacy, and the Rise of Jim Crow

"In this brilliantly conceived, immensely original, and beautifully written book, Robert Levine tells a new story of Reconstruction by focusing on the radically different visions of Andrew Johnson and Frederick Douglass along with other black leaders. Far more than a dual biography, The Failed Promise clarifies the hopes and tragedies of the era in ways that nothing else has, while also informing efforts to reconstruct the U.S. today. It should be required reading.
— John Stauffer, co-author of Picturing Frederick Douglass: An Illustrated Biography of the Nineteenth-Century's Most Photographed American 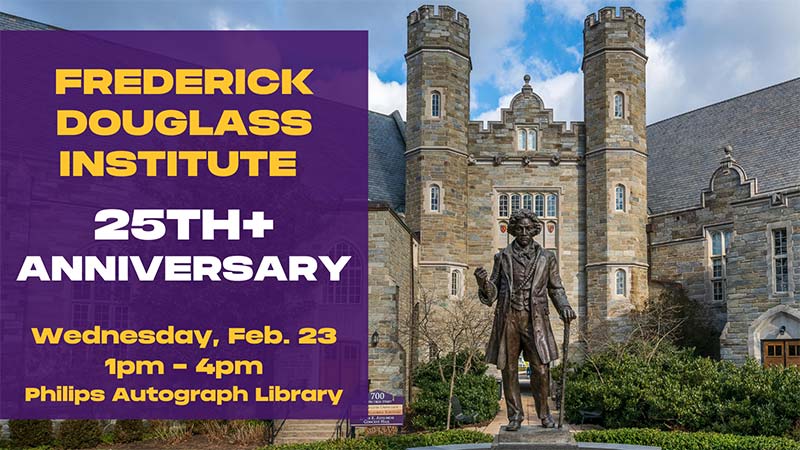 Here is the full schedule of events, all of which take place in Philips Autograph Library. All are welcomed.