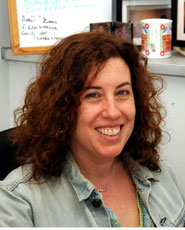 Please email to reserve an appointment.

Courses Taught in the Past

A few years ago I made an exciting change in my scholarship. I was trained as a graduate student to study interactions between behavior and biology in female rats. I now focus my attention on the behavior and biology of first-year college students. The two lines of research share in common a focus on hormone effects on behavior, and behavior effects on hormones, and the effect of environment on this reciprocal relationship. I have always had a concern with development; some of my early work at WCU focused on odors in the maternal nest and their effect on later mate choice. Now I focus on the interrelationships between physiology and adaptation to the college environment.

The body has a vast and complex array of physiological mechanisms that are mobilized in the service of protecting itself in times of challenge, such as important life transitions. The combined efforts of these systems are termed "allostasis," the process of a physiological system maintaining balance as it is challenged. Among the allostatic mechanisms available to the body, and perhaps most important to long-term psychosocial functioning, is the activity of the hypothalamic-pituitary-adrenocortical (HPA) axis. The main product of this system in the human body, cortisol secretion by the adrenal gland, helps us to adapt to an ever-changing environment, and make appropriate behavioral responses. Among its functions, cortisol increases behavioral and self-perceived levels of alertness, increases glucose utilization by muscle tissue (to facilitate "fight or flight" responses to danger), and decreases inflammation. Unlike shorter-term responses to challenge such as autonomic arousal, cortisol secretion has the potential to alter the function of multiple physiological systems, including the nervous system, in the long term.

Cortisol level is a robust predictor of well-being during early life transitions, such as the transitions to day care and elementary school. My work aims to elucidate this relationship during a later developmental stage, late adolescence/emerging adulthood. It is possible that the patterns of cortisol secretion established during the formative years with one's family are imported into the college context, influencing and being influenced by successes and challenges during the transition to college.