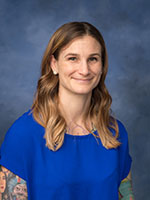 At a young age I began volunteering in nursing homes, homeless shelters, the Special Olympics - basically any organization that would take me as a teenager.  I never thought I could save the world, but I was operating under the misguided idea that I could rescue individuals in need of help. My undergraduate education in Rehabilitation Counseling introduced me to the Recovery Framework, which taught me that everyone is capable of change and that I could best help people make those changes through working in partnership with them. I learned that people are the experts of their own lives and that I could actually do more harm than good with my attempts at rescuing them.

I moved from Rehabilitation Counseling to Social Work because I was interested in learning more about neighborhoods and communities.  My direct practice experience and my research have both focused on how individuals are impacted by their communities as well as institutional and governmental policies. What I love most about social work is that we work at all levels: micro, mezzo and macro.  We promote structural change, while simultaneously working with vulnerable individuals, families and communities. What I love most about being a social work educator is that I never stop learning.  My students constantly inspire me.  Together we learn constantly new things from each other.