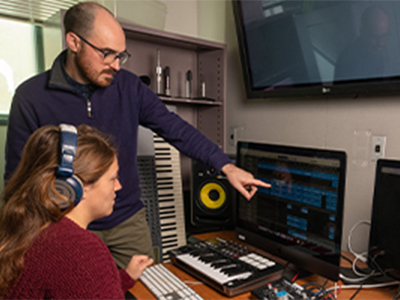 West Chester University’s Wells School of Music announces a new degree program: Bachelor of Music in Studio Composition. The program, accredited by the National Association of Schools of Music, is open to students to audition for the Fall 2023 semester.

The Bachelor of Music in Studio Composition is a degree that integrates technology and music production with creative media applications to equip students with skills for composing for film, video games, and other recorded mediums, as well as for live performance.

Adam Silverman, chair of the Wells School of Music’s Department of Music Theory, History, and Composition says, “We have expanded our educational portfolio for students who want to compose commercial music and engage in the art of music recording and media production. It opens a new and vital avenue that impacts the music our students create, the students we might attract, and the sounds that fill our halls.”

Silverman adds, “Since we started our Minor in Music Production in 2017 it has exploded in popularity, revealing just how appealing this field of study is to our student population. And since launching the Studio Composition major this year, we already have 15 students who have added it as a primary or second major.”

West Chester University is the only school in the PASSHE state system to offer a Bachelor of Music degree centered on commercial music composition. Acceptance requires an audition, and students will participate in ensembles and take the full complement of music courses common to music majors including music theory, history, performance, and conducting classes. In addition to this musical core curriculum, Studio Composition majors take courses in recording techniques, songwriting, film, video game and media scoring, career preparation, and more.

Arne says, “I am thrilled to be a part of this program at West Chester University. This is high-quality music education at an affordable price, and in an ideal location given West Chester’s proximity to Philadelphia, New York, and Washington D.C. The Bachelor of Music in Studio Composition is perfect for students who want to combine music production, entrepreneurship, and technology alongside composition and performance. At West Chester University, students have access to incredible faculty and facilities, including our Center for Music Technology as well as the opportunity to collaborate with a large and growing student body of musicians.”

Devin Arne is a composer, producer, educator, and guitarist with a musical portfolio that spans multiple genres. He has composed music for international ad campaigns, television programs, web-based media, and mobile applications. Working with top music houses in New York and Los Angeles, he has produced hundreds of bespoke compositions for brands, including Google, Mercedes-Benz, Nestle, Samsung, Tide, and DraftKings. His television credits include Keeping Up with the Kardashians, Total Divas, The Real World, Catalyst (PBS), and Grand Benders (MTV Canada).

As a producer and mix engineer, Arne has worked with alternative rap artist Dylan Owen across a five-album portfolio that has inspired millions of fans. He has released two albums under his own name, Songs of The North & There and Back, a suite for Jazz Quintet, and Kaleidoscope, a cross-genre collaboration that features musicians from the U.S., Trinidad, and Brazil. Arne’s recent projects include Unheard Voices (2021), an immersive sound installation driven by environmental sensor data, and Roadside Apparition/Refracted Oasis (2020), a collaboration with painter Laura Spaulding Best, commissioned by the Scottsdale Museum of Contemporary Art.

For more information on the Bachelor of Music in Studio Composition, contact Kaysey Davis at the Wells School of Music: kdavis@wcupa.edu.