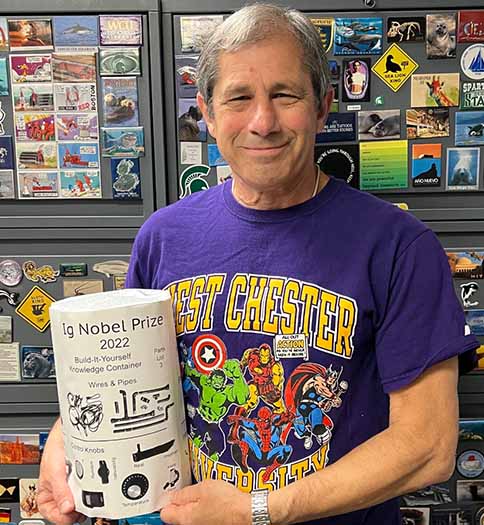 West Chester University (WCU) biomorphologist Frank Fish accepted a 2022 Ig Nobel Prize in a live virtual ceremony on September 15. Only 10 projects from around the world were honored this year. The Ig Nobels recognize science that makes people laugh, then think. As Fish’s email signature says, “You're not doing science, if you’re not having fun.”

It is for his hydrodynamics research on why ducklings swim in a line behind their mother that Fish is receiving a 2022 Ig Nobel. Ducklings, he found by studying them in a tank, conserve energy by formation swimming.

All kidding aside, Fish is at home in the water. A professor of biology and founder and director of WCU’s Liquid Life Laboratory, he conducts aquatic research, examining the morphology of swimming things such as whales and dolphins to determine how their fins and flukes affect efficiency, speed, and maneuverability. On the WCU faculty since 1980, Fish has partnered with researchers from other institutions including Drexel and George Washington universities and Shoals Marine Laboratory. His work has been funded by, among others, the National Science Foundation and the Office of Naval Research. Some of that work has been in the design for the propulsion efficiency of underwater robots such as, most recently, a robotic sea lion (with Drexel), and other robots known as MantaBot and TunaBot.

“We don’t know where the next technological breakthrough will come from,” says Fish, whose studies on why whales have tubercles (bumps) on the leading edge of their flippers has led to work in biomimetics, adapting those bumps to edges of wind turbine blades for increased efficiency.

Fish is serious about science but knows how to engage his students at WCU. He recently allowed a student to bring an alpaca to an outdoor space on campus so that his class could understand animal locomotion – and remember not only the experience but the science.

Learn more about Fish and his work here and at his Google Scholar page.