On Veterans Day and every day, the West Chester University community is proud of our student veterans and thankful for their service to our nation. More than 340 student veterans, ROTC cadets and active military members currently are enrolled at the University.

Here is the story of one such student, Chris Hollowood, who was injured serving in Afghanistan in 2013 and is now an active WCU student veteran who mentors other student veterans. 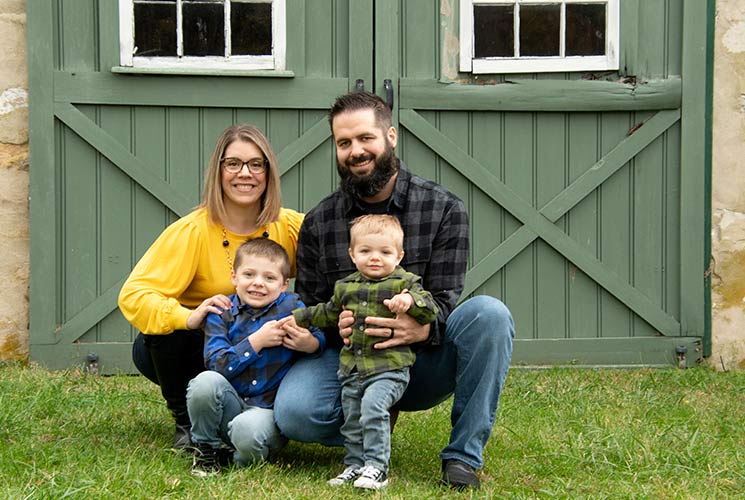 Despite the challenges that 2020 have brought, Chris Hollowood considers himself fortunate that life is going well. A computer science major, Hollowood already has a job lined up as a software engineer at Lockheed Martin when he graduates this coming May. By then, he’ll have 12 graduate credits under his belt and will begin part-time graduate studies at WCU. He and his wife, Melanie, have two winsome little boys – Dominic, 4, and William, who turned 1 on Nov. 7. Three rescue dogs round out the family.

“I am very thankful for where I am today,” says Hollowood. “I know it hasn’t been an easy year for many, and I’m doing my best to try support other student veterans and other computer science students.”

But despite being in a good place now, Hollowood knows all about dark days. He can tell you exactly when his life turned upside down – May of 2013. He was in Afghanistan, on his third deployment with the Air Force, after two earlier deployments in Qatar. He was serving as a combat advisor and was embedded with an Army unit. Combat advisors work closely with foreign security forces and need to be wary of both insider threats as well as threats from enemy forces. It’s a dangerous and high-stress position that requires equal measures valor and diplomacy. Hollowood excelled at his work and was gratified he could contribute in this way.

On that May day, Hollowood’s team came under fire on a routine mission and he had to suddenly leap off a moving armored vehicle. While he escaped getting shot, he sustained serious injuries in the fall. After emergency surgery in Germany and a long rehab at Walter Reed Army Medical Center in Washington, D.C., Hollowood returned to service at Hurlburt Field in Florida, where he worked in logistics and supply chain management.

He chafed at not being able to serve in a combat role. “I hit bottom when I was in Florida,” he says. “It was hard to know others were deployed and I would not be able to serve in this way.”

Hollowood pulls out his phone and shows off a photo of the individual who saw him through those dark days – his wife, Melanie. They met in Washington, D.C. before he was injured, but it was during his endless weeks of recovery at Walter Reed that they knew they wanted to marry.

When Melanie couldn’t find work in her field near the Florida base – she has a Ph.D. in geography – the couple opened a gym. They specialized in training injured veterans. It’s something Hollowood can relate to – to this day he contends with chronic, severe nerve damage in his left leg. 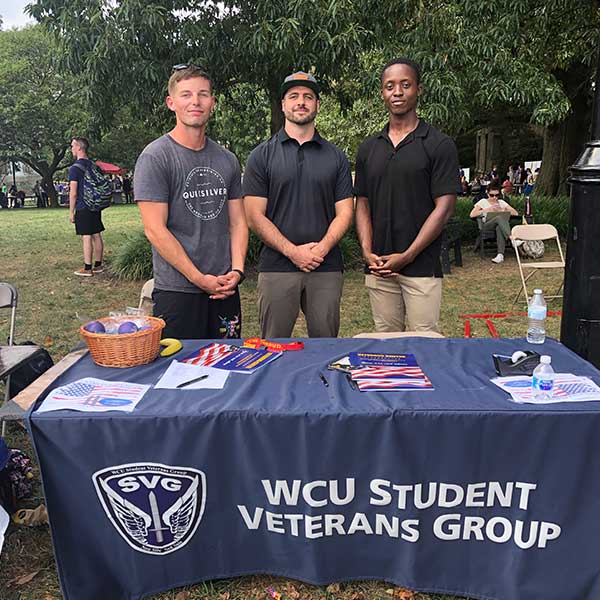 Life was starting to look up in Florida, especially after the couple’s first child, Dominic, was born. But Hollowood still struggled with the fact that his injuries would always mean a different role in the military than he had envisioned. So the Hollowoods scrapped the old playbook and made new plans. Melanie secured a job with the Census Bureau in Philadelphia. Among its other advantages, this career relocation would provide Chris the ability to go to school fulltime. When it came time to choose the right college, Chris turned to Melanie for advice. She earned her bachelor’s and master’s degrees in geography at WCU and encouraged him to apply.

“Chris left an indelible impression upon me from our first meeting,” says Lillian Morrison, director of WCU’s Veterans Center.  "You won’t find a more selfless individual who is so eager to assist others.”

“Chris has been a force multiplier for our student body as he has assisted numerous veterans in successfully navigating the transition from military to college life and then on to professional employment,” notes Morrison. “I am very proud of Chris and thankful he chose this University and our veterans program to further his aspirations and capacity to give back to others.”

Hollowood’s days are hectic as he juggles classwork and parenting during a pandemic. Melanie is working long hours as the 2020 Census wraps up. While Dominic heads off to preschool each day, “Baby Will” is home with Chris three days a week. On synchronous class days, the grandparents take over childcare. Yet as busy as he is, he still makes time to be involved in student life. He is parliamentarian of the Student Veterans Group and a member of the Computer Science Club. Both groups have been active virtually during the pandemic.

“We connect a lot with first-year computer science students online to make sure they are getting adjusted,” says Hollowood. “Likewise, while we can’t meet in person, I work to mentor student veterans who have just joined us.”

Hollowood remembers what it felt like to go from being an experienced airman to a new college student. “I was very nervous about leaving the military after 11 years,” he says. “I grew up in the military; it’s where I spent my entire life. But I couldn’t have had a better experience transitioning from a completely different world to West Chester. From the resources to the people, like Mrs. Morrison, to the education, it’s been such a positive experience. The way everything has worked out has been incredible.”