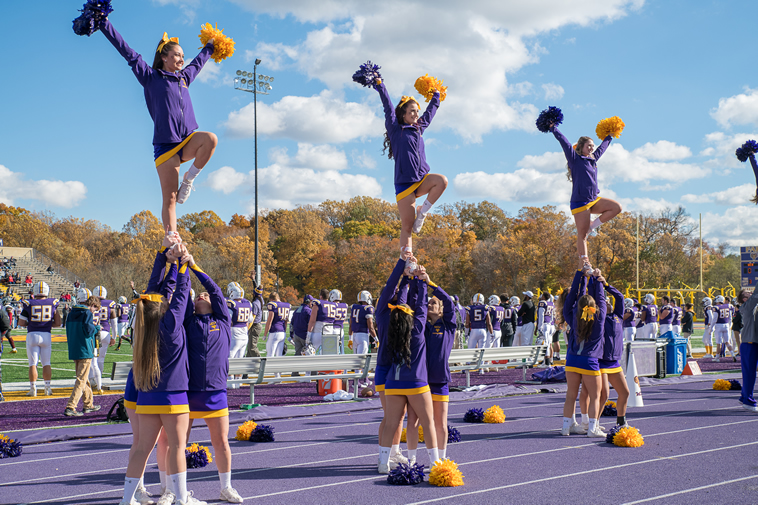 It won’t be a stampede, but a posse of West Chester University alumni and students who will be moseying along South Church Street on Saturday, Oct. 26, for WCU’s Homecoming Parade, themed “Wild Wild West Chester.” The parade steps off at 10:30 a.m. and kickoff for the football game against East Stroudsburg University is at 2 p.m.

This year, WCU’s newest Homecoming tradition, Church St. Fest, will be combined with the Homecoming Parade, occupying Church Street from Sharpless Street to Rosedale Avenue from 10 a.m. to 2 p.m. Free activities, games, giveaways, live music, inflatables, and snacks that are the heart of Church St. Fest will begin at 10 a.m. (rain or shine). In keeping with the Western theme: free buffalo wings and Old West-style photos. Local food trucks will be onsite offering a variety of food and refreshments for purchase.

At 10:30 a.m., Church St. Fest will pause as the Homecoming parade marches south from Sharpless Street along Church, ending at Church and Rosedale. The primary viewing area for the parade will be at the intersection of Church Street and University Avenue with additional seating provided. The parade is expected to last approximately an hour.

Immediately following the parade, the Nashville, TN, band The Roads Below will take the stage at Church St. Fest, laying down dynamic arrangements of hard hitting melodies, with a twist of homegrown country. Church St. Fest will wind down at 2 p.m.

The WCU Alumni Association is hosting their tailgate in the parking lot to the north of the Sturzebecker Health Sciences Center from 12 to 3 p.m. Pony rides and a petting zoo complement this year’s family-style fun, which includes a DJ, bounce houses, games, face painters, balloon artists, pumpkin decorating, and more. The $5 admittance fee (cash only) covers snacks and beverages. Levante Brewing Company and Jerry’s Kitchen food truck will be onsite. Children 17 and under are admitted free.

After the sports are over, those who enjoy Halloween should visit the E.O. Bull Center for the fifth annual Halloween Haunted House Fundraiser, this year benefitting the University Theatre student group that stages the adventure. From 7 to 10:30 p.m., these students will recreate scenes from classic and modern horror films throughout the first floor of Bull Center. The experience lasts about 10 minutes. Admission is free, but donations are appreciated. Recommended for ages 12 and up.

Homecoming Weekend concludes with the University’s traditional West Chester Borough clean up on Sunday, Oct. 27 (rain or shine). Check in is at 9 a.m. in Sykes Student Union 10A.