Students! Want to Save Money on Room Décor, Clothes, Furnishings?

On South Campus, there are three shipping containers full of gently used room furniture, wall art, lamps, all kinds of organizers, clothes (some new and unworn, with tags still on!), electronics, and more from WCU students who moved out in May and chose not to keep certain items – and not to throw them out.

Now those items, which have been assessed, sanitized, scrubbed, and sorted, are available for purchase (cash only, please) at WCU’s first-ever “Pack It Up – Pass It On” yard sale in Sykes Ballrooms on Sunday, Aug. 25. First-year, transfer, and returning students who live both on and off campus can shop the bargains from 10 a.m. to 4 p.m. Bring cash and tote bags, if you have them. 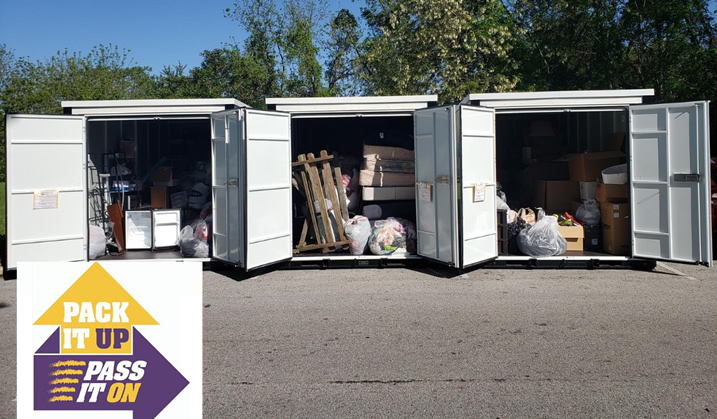 “We really want to change the ‘It’s all disposable’ mindset,” says Amy Maxcy, Office of Sustainability (OoS) administrative support and coordinator of Pack It Up – Pass It On. She says the program and its spring 2019 implementation are the brainchild of a group of students who attended last fall’s Students for Zero Waste conference and found inspiration there from other universities that had established similar programs.

WCU’s campus-wide initiative encouraged students moving out of University housing as well as off-campus apartments to consider rehoming unwanted clothing and household items that were still in good, usable condition. Donation bins and signage were placed in the lobbies of all eight traditional and affiliated North Campus residence halls and the South Campus Village clubhouse. Off-campus students who had large items like furniture had to complete an online form and take a photo of the item in order to participate in a special borough pick up on May 8. Donations were so plentiful that Maxcy said some clothes had to be turned away because the shipping container holding clothing was filled so quickly.

There’s a belief that the majority of millennials would never purchase used goods or clothing, but Maxcy says, “I’ve heard just the opposite, directly from the students. They’re happy to give a second life to a nice piece of furniture or well-cared-for clothing. They’re willing to save a few dollars by buying used and they’re going to thrift stores. We’re saving them the trip as well as saving them money by hosting the Pack It Up – Pass It On yard sale. We want to continue this, maybe expand it, so we can divert more usable material from landfills.”

She and other volunteers spent much of the summer inventorying, cleaning, and photographing the donations. She created a digital inventory of most of items on Google Drive so students with WCU email addresses can view the majority of what’s available. Students can reserve items, the most expensive of which will probably be about $40, she says. Proceeds will help fund next year’s rental of the shipping containers and other overhead for the initiative.

In May, Maxcy was one of the volunteers gathering the donated items from the residence halls and shuttling them to South Campus. On one trip, she had a mini-fridge in her possession for less than one minute before someone offered to buy it. “Sold!” she said, making the first sale.

The OoS also has a Facebook Group where those who have a WCU e-mail account can buy and sell used items.