The Early Childhood Cognition and Emotions Lab (ECCEL) of West Chester University was awarded $25,000 from the National Endowment for the Arts (NEA) Research: Art Works Grants Program to examine the impact of the arts on children’s stress levels. The arts can lower stress levels for young children, the results suggest. The investigation is the first we know of to show that the arts may help to reverse or alleviate the impact of poverty on children’s physiological functioning.

Near the turn of the century, Sonia Lupien and colleagues asked whether poverty could get under the skin (Lupien, King, Meany, McEwen, 2001). The answer was yes. Poverty influences physiological systems that respond to stress, and that influence can be measured by the hormone cortisol. The result is a host of negative emotional, cognitive, and physical health outcomes for low-income children. 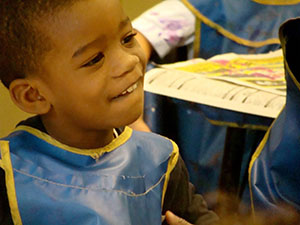 A March 2014 article in the Philadelphia Inquirer highlighted this project:

For four years, Ellie D. Brown has been trying to determine whether an early education in the arts enhances children's ability to learn overall, and again and again she has turned to an unlikely tool of inquiry: a small swab of sponge.

More than 24,000 times, the West Chester University associate professor of psychology and her colleagues have reached into the mouths of 500 children at Settlement Music School's Kaleidoscope Head Start program and a nearby control school to measure cortisol, the hormone associated with stress levels.

In this NEA-funded research project, Dr. Brown and her research team have asked whether the arts could “get under the skin” and alleviate poverty’s toll on physiological functioning for children attending a Head Start preschool. The Head Start is Settlement Music School’s Kaleidoscope Arts Enrichment Program, where children receive daily music, dance, and visual arts classes in addition to their regular early learning or “homeroom” classes.

The research suggests a powerful impact of these arts classes. For example, the researchers have used an experimental design to ask: Can a single arts class change cortisol? They have determined that the answer is yes: When children participate in an arts class at a given time of day, their cortisol levels are lower than when they participate in regular homeroom at the same time of day.

The researchers have also asked questions like: Can more arts result in more cortisol change? Their study suggests the answer to this is also yes: On a day when the children participate in more arts classes, their cortisol is lower than it is on a day with fewer arts classes.

In a further stage of the research, the team has compared children attending Settlement Music School’s Arts Enriched Preschool Program to those attending a nearby Head Start that does not include music, dance, and visual arts classes. Because the preschools differ in daily schedules, the comparative analyses are complex. Preliminary results, however, suggest lower stress levels for children participating in the arts program.

The study has powerful implications. Whereas arts research has previously suffered from a lack of objective indicators, the current investigation provides strong evidence that the stress hormone cortisol can measure arts’ impact—under the skin. At a time when our nation is searching for interventions that might alleviate the impact of poverty on child development, this study suggests the arts may have a key role to play. For children growing up with economic hardship, the arts may help to equalize educational opportunities and life outcomes.