The photographs below are of the students receiving their awards.

More pictures from the awards ceremony may be found in the slideshow uploaded to the department's youtube channel. 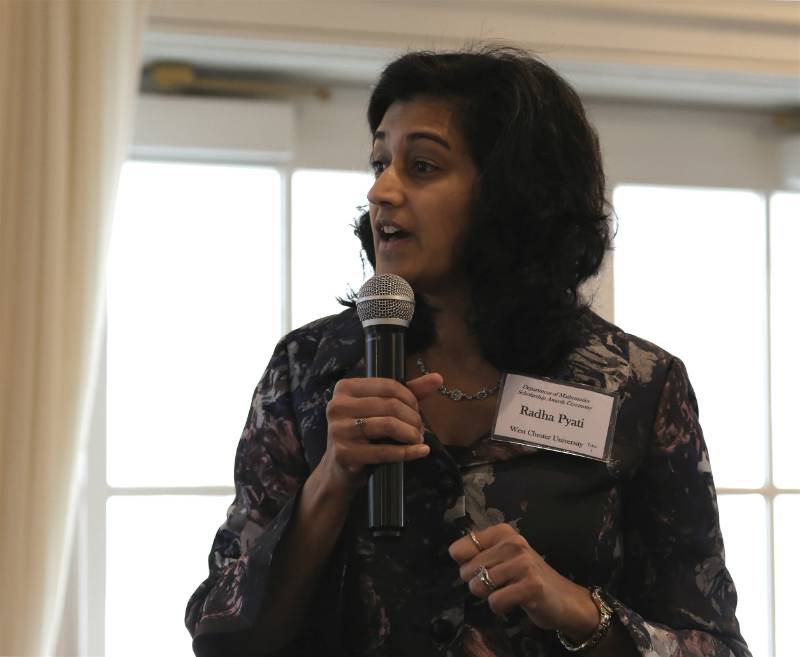 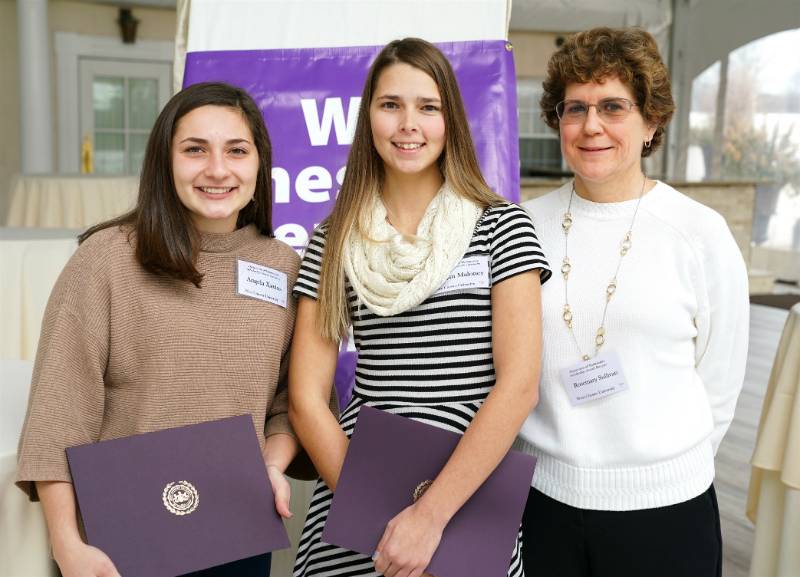 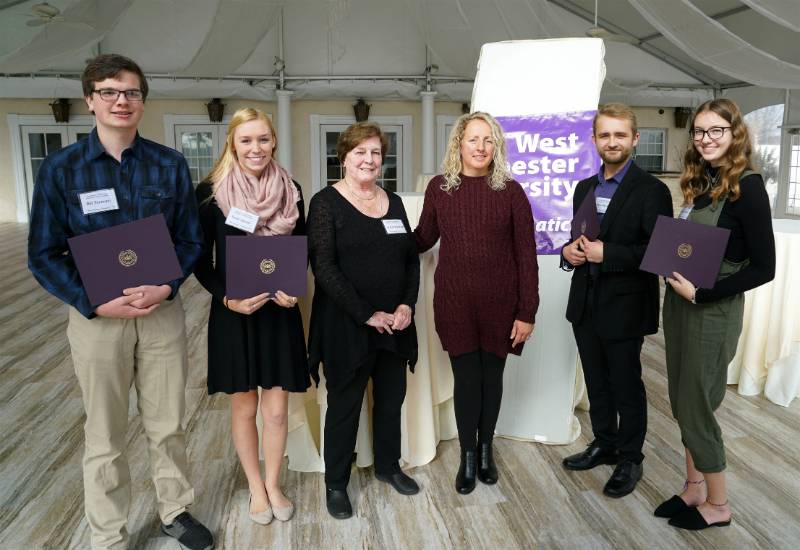 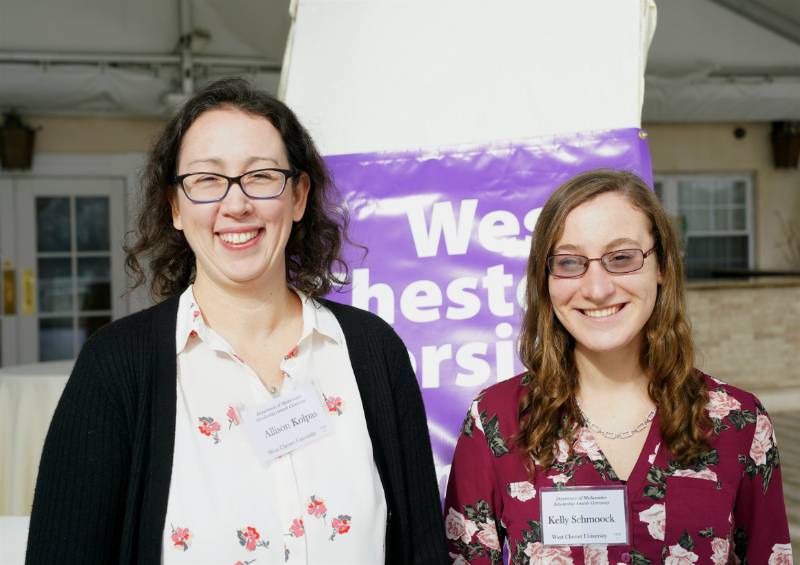 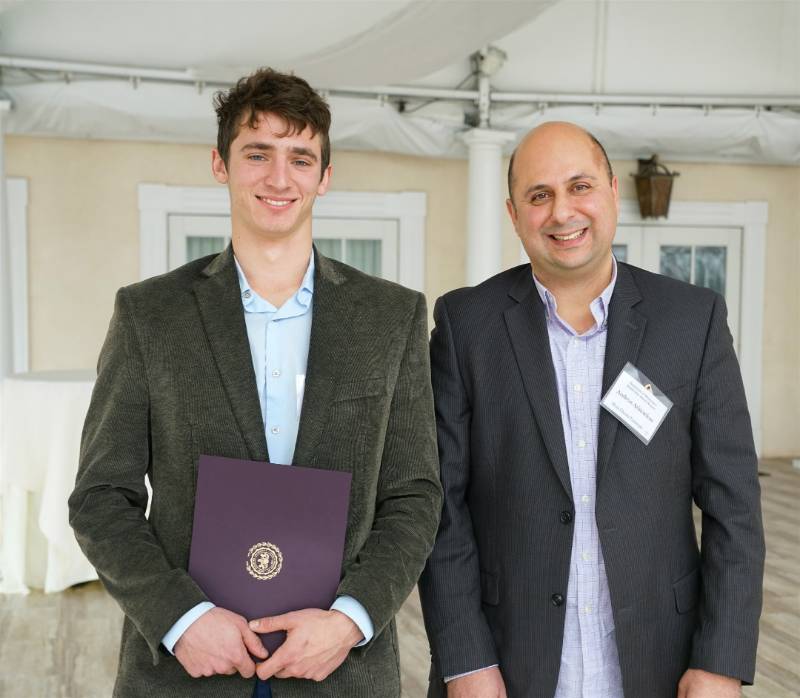 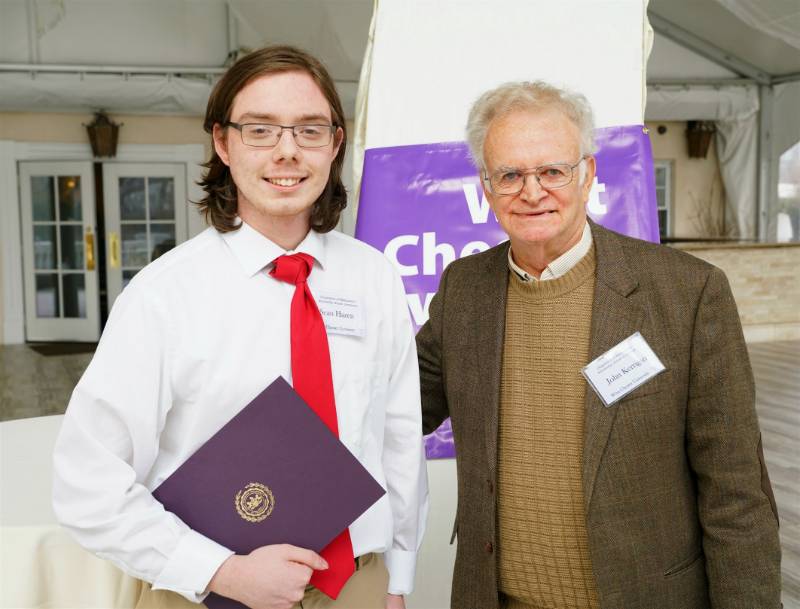 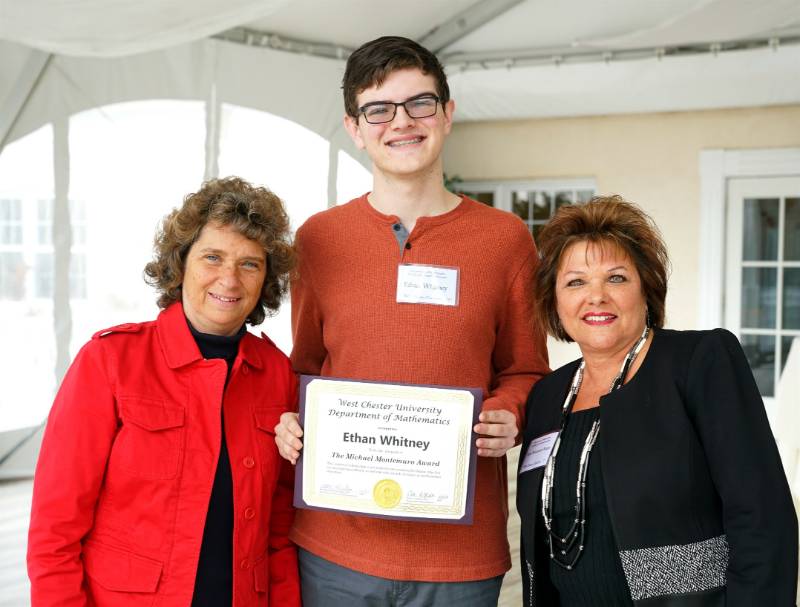 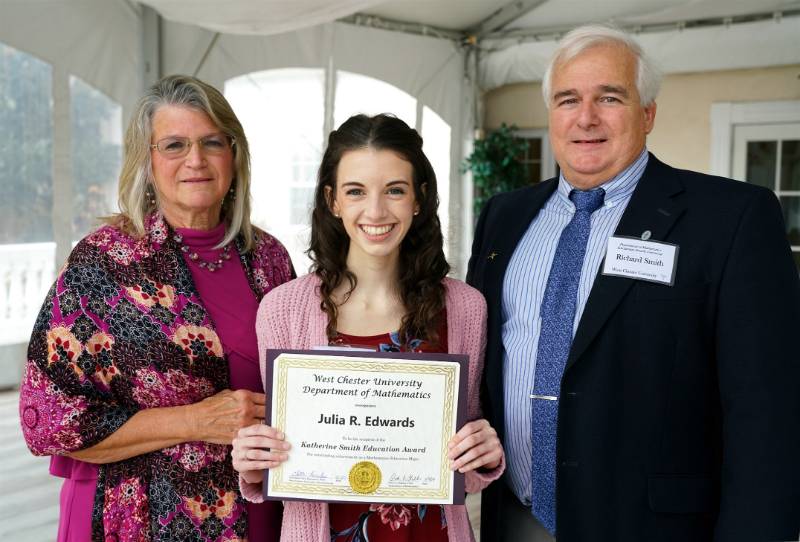 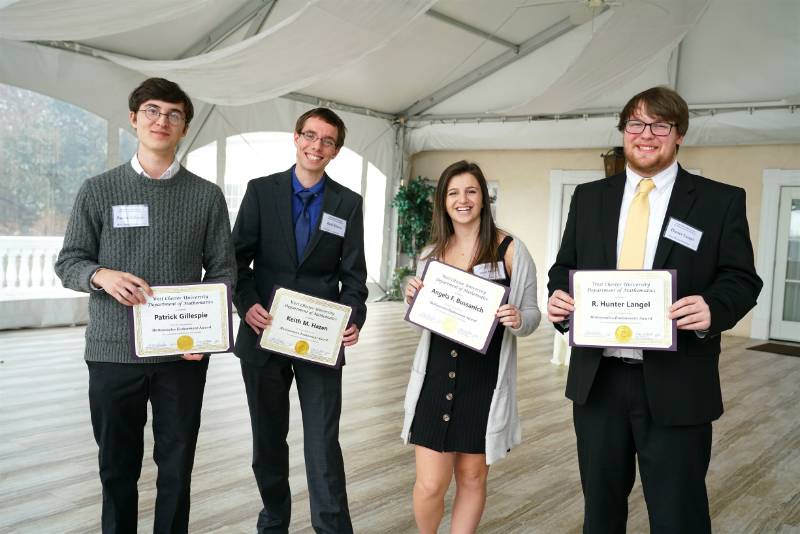 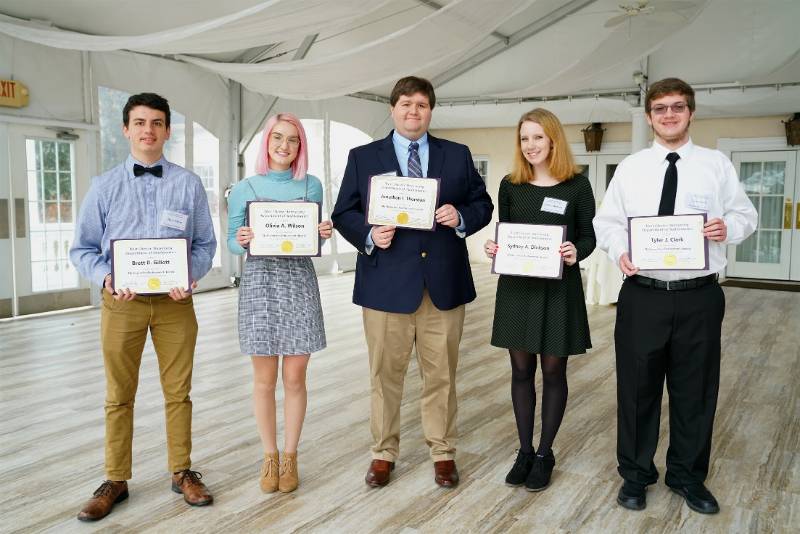 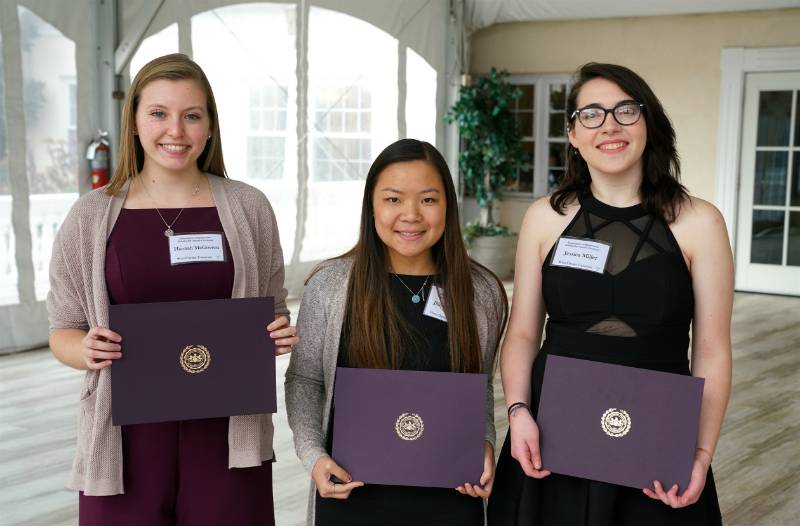 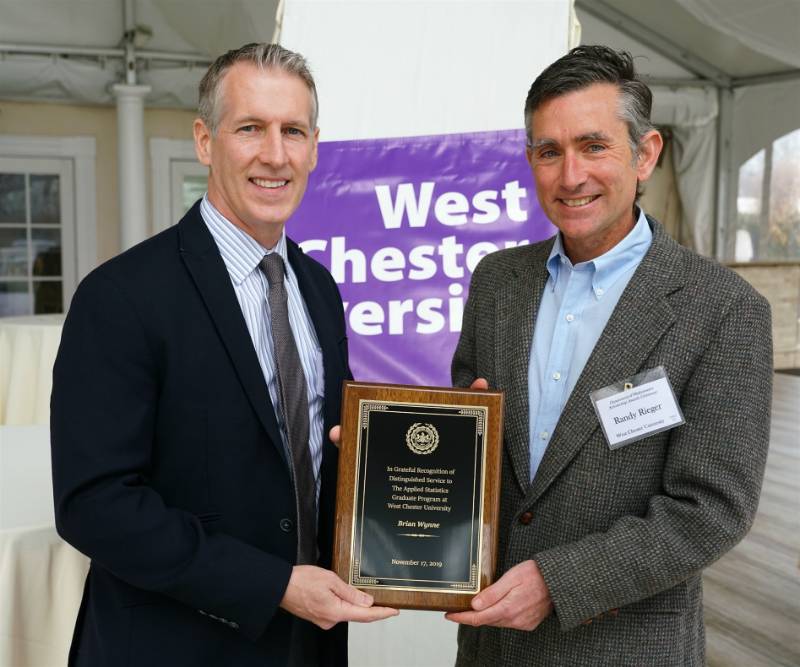 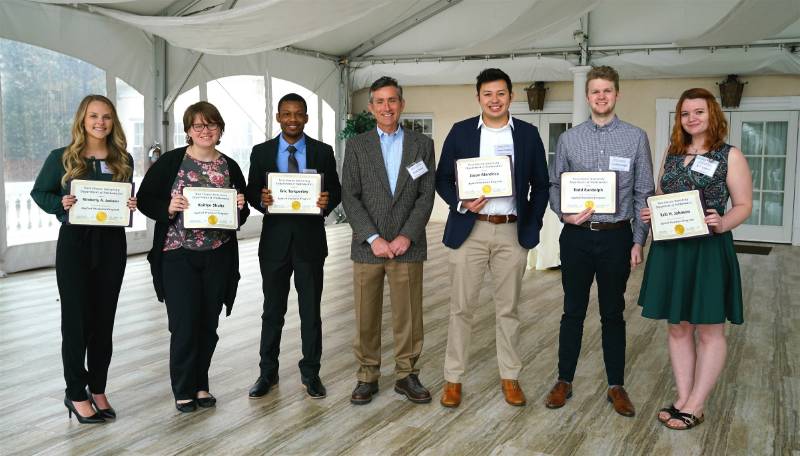 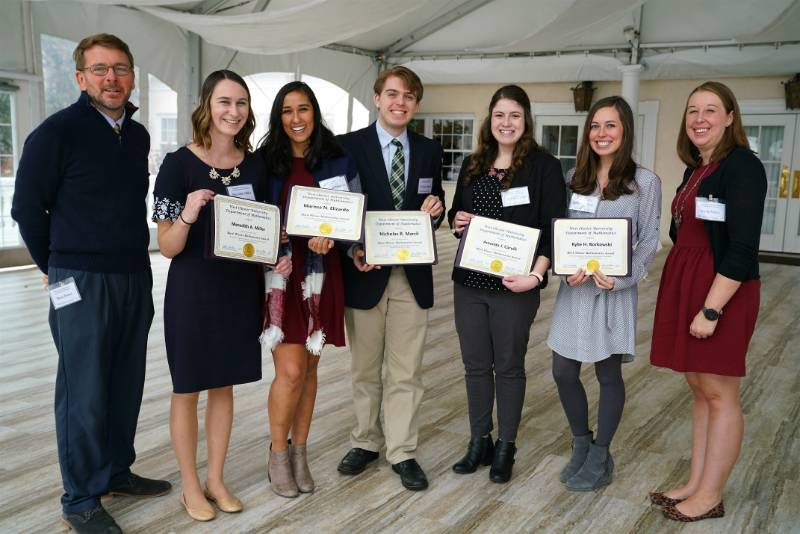 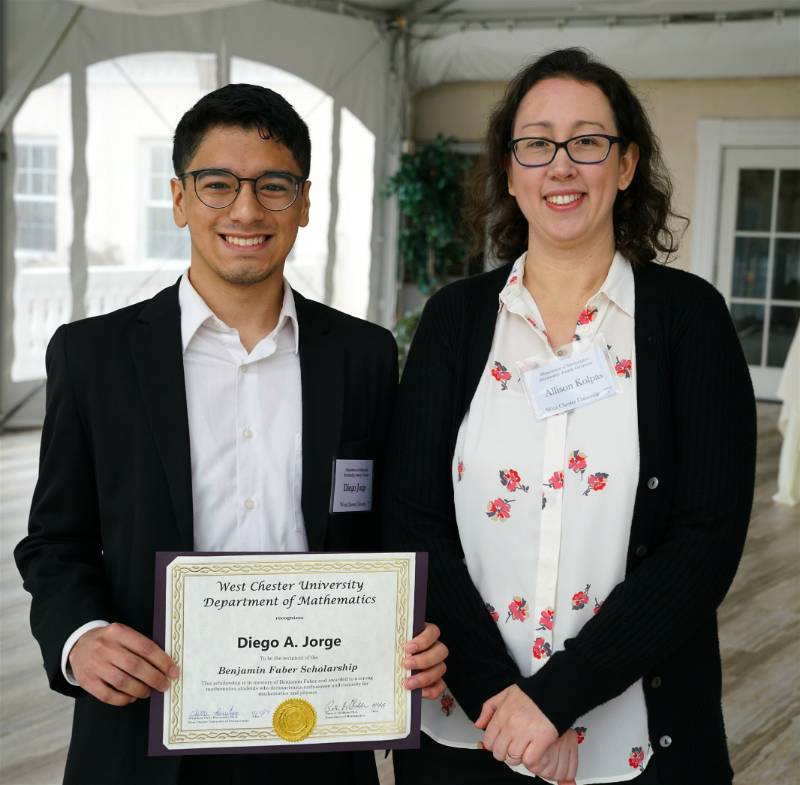 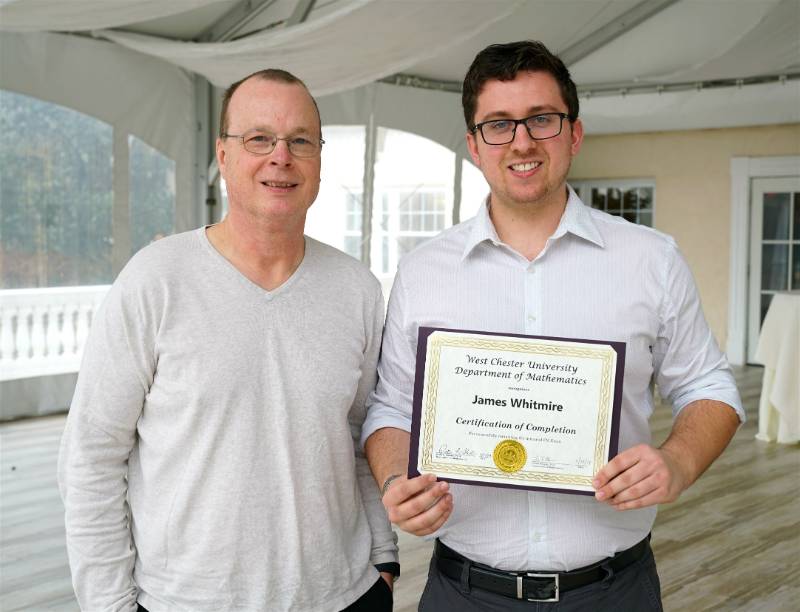 The Mathematics Scholarship was created in 1974 by the faculty of the Department of Mathematical Sciences.  The initial purpose was to raise funds  for an endowment that would generate enough interest to provide several monetary awards to undergraduate majors of the department for their high academic achievements.

Two class members of the Class of 1943, Jean Stevenson and Oreste Leto,  established this fund in celebration of their 50th Class Reunion.

Mark Wiener was a Professor of Mathematics, Mathematics Education, and Computer Education at West Chester University.  He was the sponsor of the Anderson Math Club and was President of the Association of Teachers of Mathematics of Philadelphia and Vicinity (ATMOPAV).

Dr. Albert E. Filano was a long-serving faculty member and administrator, serving the University for more than 35 years as Professor of  Mathematics, Department Chair, Division Director, Academic Vice President, Interim  President, and advisor to the Newman Center.  The scholarship fund was established as part of the naming of Filano Hall dedicated on August 19, 2000, the couple’s 50th wedding anniversary.

This scholarship was created by George and Karin Faber, parents of Benjamin, after his death in an automobile accident on October 30, 2001, when a deer struck his car.  Ben was a 1996 graduate of Unionville High School.  He received an associate degree with honors from Delaware County Community College and was a senior at West Chester University pursuing degrees in both mathematics and physics.  Ben was also a member of Phi Theta Kappa national honor fraternity.  Ben earned the rank of  Eagle Scout while a member of Troop 22.

The Applied Statistics Graduate Degree Program was created in Fall 2003, and this fund was created to provide an award to graduate students in the program who have shown exceptional academic achievement in their studies.

For 48 years Professor Frank Milliman taught, mentored, and advised thousands of West Chester University students.  Among his former students, one can easily find university professors, professional mathematicians, actuaries, and literally hundreds of current secondary school mathematics teachers who constantly tell us how they strive to teach mathematics, to assess student achievement (with high standards), and to be available for students the way Professor Milliman was for them.  Professor Milliman’s name will always be synonymous with the Department of Mathematics.

When Mary Pinder was a junior at West Chester State Teachers College, she wona mathematics award for excellence.  This event, in the spring of 1942, had a great impact on Mary and she always knew that one day she would create her own scholarship for West Chester mathematics majors.  In the spring of her senior year, her dean asked her if she would be willing to substitute teach math at Pierre S. du Pont High School in Delaware.  Mary accepted the position and took the bus from outside (Old) Main Hall to Delaware every day to teach.  In May,  Mary attended her West Chester graduation and returned to du Pont Monday,  as its school year did not end until mid-June.  She graduated with the highest honors and three majors: mathematics, English, and social studies.

Established by the Department of Mathematics, the purpose of this fund is twofold:  (1) to reimburse, either partially or fully, those West Chester students who have passed one of the actuarial examinations offered by the Society of Actuaries,  Casualty Actuarial Society, or other certifying organization; and (2) to recognize excellence in actuarial science.

Jim Rubillo credits Albert E. Filano and Frank E. Milliman for recognizing and supporting students who demonstrated promise in mathematics education.  After graduating in 1963, Jim embarked on a 47-year career in public education.  He remained active within several mathematics professional associations at the state and national levels and provided teacher professional development programs in 50 states and across Canada.  Most recently,  Jim served as the Executive Director of the National Council of Teachers of Mathematics (NCTM) for eight years.  Jim received the Ross Taylor/Glenn Gilbert National Leadership Award of the National Council of Supervisors of Mathematics, and the NCTM  Lifetime Achievement Award for Distinguished Service to Mathematics Education.  Jim also received the University’s Distinguished Alumni Award and an honorary Doctor of Science degree.  This scholarship awards a math education senior who demonstrates leadership and excellence in mathematics education courses.

Dr. Michael Hirsch graduated in 1996 with a Bachelor of Arts in Mathematics and Computer Science.  He later attained a Masters in Applied Mathematics from the University of Delaware and a Doctor of Philosophy in Operations Research from the University of Florida.  Dr. Hirsch credits Dr. Frank Grosshans, an accomplished West Chester University faculty member and mathematician, for introducing him to the government defense field, where he has spent over 20  years developing solutions for both defense and commercial problems. Today, Michael is the owner and President of ISEA TEK (Industrial & Systems Engineering  Analysis Technologies). This scholarship recognizes a mathematics major who demonstrates potential and excellence in several core mathematics courses.

Katherine Smith graduated from West Chester University in 2011 with a Bachelor of Science in Mathematics Education.  Katherine's father, Richard, and mother, Patricia who is a 1977 West Chester University alumna, established this scholarship in honor of their daughter.  This scholarship recognizes a student majoring in mathematics who demonstrates high academic achievement in the view of mathematics faculty.

Established following the generous contribution of alumna. April Taylor M ’11, this fund offers support for programming, speakers, or events that enhance the experience of students and alumni of the Applied Statistics Graduate Program.

Dr. James L’heureux joined the faculty of West Chester State College in 1969.  In 1974, Professors L’heureux, Branton, Morgan, and Verno raised $112 from selling books, which marked the beginning of the Mathematics Scholarship Fund.  Under the leadership of Dr. L’heureux, this fund grew to over $100,000 by his retirement in 2000 and today it has a balance of well over $750,000.  In addition to the Mathematics Scholarship Fund, Dr. L’heureux also encouraged friends of the Department to establish other scholarship funds for our students.  The L’heureux Endowment was established by colleagues of Dr. L’heureux in recognition of and gratitude for all he has done for the Department and our students.