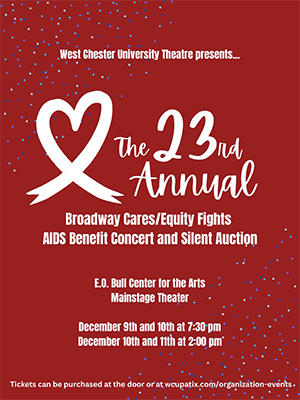 The student-led University Theatre group at West Chester University presents the 23rd annual Broadway Cares/Equity Fights Aids Benefit Concert and Silent Auction. Performances are Friday, December 9 and Saturday, December 10 at 7:30 p.m., and Saturday December 10 and Sunday, December 11 at 2 p.m. Performances are staged in the MainStage Theatre at the E.O. Bull Center for the Arts, 2 E. Rosedale Ave., West Chester. General admission tickets are $14 at http://www.wcupatix.com/organization-events and $12 at the door. More information and a link to make a donation can be found at: www.facebook.com/aidsbenefitwcu

Broadway Cares/Equity Fights Aids is a New York-based non-profit that provides services to those living with AIDS and HIV. The 23rd Annual Broadway Cares Equity Fights AIDS Benefit Concert and Silent Auction is a student directed and produced event featuring variety show-style acts starring West Chester University students. The concert is a funny and often moving mix of performances interspersed with facts and stories about HIV and AIDS. The annual event has become a campus highlight. 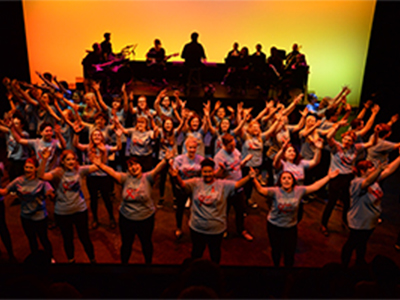 This year’s event will feature more than 50 students from the Department of Theatre & Dance who will perform musical theatre and dance numbers, in addition to students from other campus performance groups including the Deep Dish Pizazz Improv Team, High Street Harmonix, The Suspensions, Top Drawer Swing Dance, and WCU’s Irish Dance Team. WCU alumni will also participate via a produced video that allows alumni participation from all over the world.

A silent auction is held in the lobby prior to each performance with many items donated by the Broadway Cares/Equity Fights Aids office in New York. Items include signed posters and playbills, Christmas ornaments, gift cards to local stores, and handmade baskets.

The West Chester University event is one of the largest outside sources of funding for Broadway Cares/Equity Fights Aids. In 2019 before COVID 19, the event proceeds totaled just over $20,000 from the auction, ticket sales, and donations, the highest amount raised in the event’s history.

Tom Viola, the Executive Director of Broadway Cares/Equity Fights Aids, says, “We are so grateful for the passionate and hardworking students at West Chester University, who have raised more than $120,000 for Broadway Cares/Equity Fights Aids over these last 20 years. These tenacious and dedicated students are leading the charge of young people creating advocacy and action through the arts. Their creativity, good will, and commitment to social justice is the wind in our sails upon which we all will ride into the future.”

“We are pleased to be able to raise money to support those living with HIV/AIDS,” says the show’s Director April Marion. “It has been an honor to direct this year’s event. Every staff and cast member shares such a passion for this event. We do it not only to help those affected by AIDS, but also to educate our audience members. The bonus is we get to do it while also doing theatre and dance, which is something we love to do.”