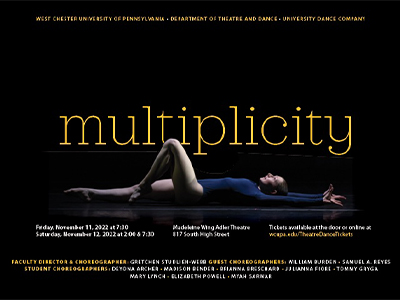 Multiplicity, by definition meaning “a large variety,” is directed by Professor of Dance Gretchen Studlien-Webb. A variety of dance styles - contemporary jazz, contemporary modern, tap, and hip-hop - will be included in the 14-piece concert that will be performed by a total of 61 student dancers. Multiplicity will feature the work of two guest artists: Samuel Antonio Reyes choreographs a hip-hop piece and William Burden choreographs a tap piece. Additional choreography is provided by Gretchen Studlien-Webb and eight student choreographers.

“West Chester University Dance is thrilled to present the work of our two talented guest artists,” says Studlien-Webb. “We are equally excited to showcase the work of our talented student dancers, student choreographers, and student designers. Our student choreographers are pushing their creative boundaries this year and have choreographed fantastic, mature, and exciting work. Our lighting designer, Jon DeGaetano ’10, who earned a B.A. from West Chester University’s Theatre & Dance Department and an M.F.A. from Brooklyn College, is sculpting the space with light, video, and scenery; creating visually enticing dance environments for each piece.”

Samuel Antonio Reyes (Sammy) received a B.F.A. in Performing Arts from the University of the Arts. He is the proud recipient of the Cushman Acting Award and the Theater Ensemble Award. Post-graduation, Reyes continued his dance training under Philadelphia dance royalty: Renni Harris and Ronen Koresh. He has danced with many local Philadelphia artists such as Charles O. Anderson “Dance Theater X,” Kate Watson-Wallace, and Montazh Performing Arts Company. Reyes was nominated for a 2002 Barrymore Award for Best Choregraphy and Movement in the musical St. Louie Women and Pal Joey where he assisted Philadelphia-based choreographer, Myra Bazell. He toured and created for Disney’s radio and television star Raven Symone from 2004-2008. Reyes continues to collaborate and set work on both theatre and dance companies. He has worked with Luna Theater, CatScratch Theatre, Zen One Dance Collective, and 11th Hour Theatre Company, among others. He is currently an adjunct professor and artist-in-residence at Muhlenberg College and is the Artistic Director of his company, SANBROOKA Productions.

William Burden received a B.F.A. from the University of the Arts and currently dances with Philadanco. He began dancing at the Creative & Performing Arts H.S. under the direction of Ms. LaDiva Davis. He attended The Rock School for Dance Education and was a scholarship student at the Alvin Ailey American Dance Theatre. William also has many years of training with Tap Team Two & Company co-directed by his father, Robert Burden. William has been a company member with Eleone Dance Theater and Spectrum Dance Theatre.