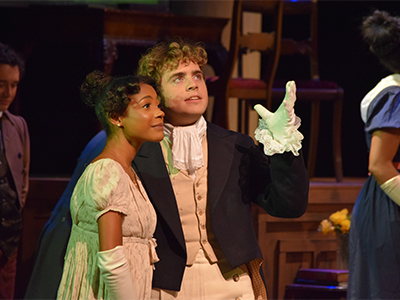 Harvey Rovine, chair of the Department of Theatre & Dance says, “We are proud of the high-quality performances that our West Chester students and faculty in the Department of Theatre and Dance bring to our campus. This season, as in year’s past, there is a little of something for everyone to provide entertainment for all interests and ages. We invite the entire community to experience for themselves the professional nature of our productions.”

Spring Awakening - Book and Lyrics by Steven Sater, Music by Duncan Sheik. Based on the play by Frank Wedekind

The winner of eight Tony Awards, including Best Musical, Spring Awakening follows a group of teenage German students as they struggle to understand and obtain agency over their own bodies inside of a repressive, dismissive, ill-informed, and often cruel society. The folk-rock score by Duncan Sheik and Steven Sater is equal parts powerful and poetic, acting as a raw reflection of the characters’ inner lives, and a powerful celebration of youth and rebellion. Content warning: nudity, rape, suicide, violence.

Eurydice reimagines the classic myth of Orpheus and Eurydice through the eyes of its heroine. Dying too young on her wedding day, Eurydice must journey to the underworld, where she reunites with her father and struggles to remember her lost love and begins to discover that the cost of living again can sometimes exceed the cost of staying dead. Sarah Ruhl’s play transforms a traditional myth into a contemporary meditation on love worth grieving for through dark humor and wit.

Charlotte’s Web - Adapted by Joseph Robinette. Based on the book by E.B. White.

Charlotte’s Web, one of the most beloved and celebrated pieces of children’s literature ever written, comes to life in this poignant adaptation of the E.B. White masterpiece.  Playwright Joseph Robinette created a play with beautiful simplicity.  Join Wilbur the pig, his human friend Fern, Templeton the rat, and all the barnyard inhabitants as they learn what it means to be a true friend from the selfless spider, Charlotte.  This family friendly production will be sure to delight audiences both young and old.

The Student Written One Acts is an evening of short plays penned by the Theatre 313 Playwrighting Class that reflect the issues and themes that resonate with West Chester University students. Students serve as directors, designers, technicians, stage managers and, of course, actors to present this night of original student work.

Twelfth Night tells the story of Viola, a young heroine who washes up on the shores of Illyria, disguises herself as a man, is sent to court a countess and falls hard for a Duke. As she navigates this strange and wonderful new land, she finds her true self and her true love in the process. Celebrate the 400th anniversary of Shakespeare’s First Folio with us!