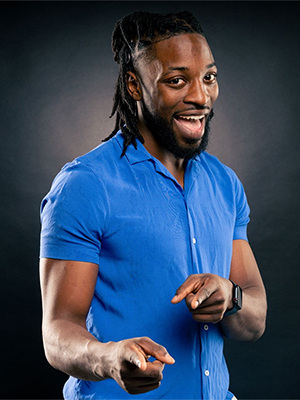 Tickets are Now on Sale for Lawson’s One Show Only on Saturday, September 24 at 8 p.m.

PREACHER LAWSON, the star comedian made famous by NBC’s hit television series, America’s Got Talent, will take the stage at West Chester University for one performance only on Saturday, September 24 at 8 p.m.  Tickets are now on sale to the public at http://www.wcupatix.com/wculive or 610.436.2266. The performance will take place in the Emilie K. Asplundh Concert Hall, Philips Memorial Building, 700 S. High Street, West Chester.

Lawson is being programmed by the University as an entertainment outlet for students, families, as well as members of the surrounding community during the University’s planned “Family Weekend.”  Tickets are expected to sell out.

“We are thrilled to present this high caliber and highly entertaining performance by Preacher Lawson,” says Andrew C. Lehman, Vice President for University Affairs and Chief of Staff at West Chester University. “We invite students, families visiting for West Chester University’s Family Weekend, and members of the surrounding community to join us for what we know will be an evening of roll-in-the aisles laughter for audiences of all ages.”

Lawson is best known for his appearance on season 12 of NBC’s hit series, America’s Got Talent (2017) where he made it to the final round. Based off his stellar performance in season 12, Preacher was invited to compete on America’s Got Talent: The Champions (2019) and Britain’s Got Talent: The Champions (2019) where he advanced to the finale after receiving the most fan votes. Preacher can be seen on HBO’s A Black Lady Sketch Show and NBC’s Connecting. He was also the host of the Facebook Watch series World’s Most Amazing Dogs (2019) with George Lopez and Lisa Vanderpump and has built a following on YouTube of over 500,000 subscribers. In 2019, Preacher shot his first stand-up special, Get To Know Me, which premiered on BET+. Preacher recently completed his residency hosting AGT Live in Las Vegas and continues to perform at sold-out venues around the country.

Lawson is being presented as part of the University’s WCU Live! performance series. There is an Opening Act by New Jersey native, Darren Moore. The remaining WCU Live! season includes: The Great DuBois, a two-person circus show, on Friday, November 4, at 7 p.m.; Erin Brockovich will speak as part of the President’s Speaker Series on Saturday, March 11, at 8 p.m., Rhythm of the Dance on Tuesday, March 14, at 7 p.m., and Tamagawa University Taiko Drumming and Dance on Tuesday, April 11, at 7 p.m. Tickets for all of these event are also on sale at www.wcupatix.com.

Enrolling more than 17,600 students, West Chester University is the largest institution in the Pennsylvania State System of Higher Education. Founded in 1871, the University is a comprehensive public institution, offering a diverse range of more than 200 undergraduate, master’s, and doctoral programs in more than 50 fields of study. In addition to the main campus in West Chester, the University offers programs through its graduate center, the campus in Philadelphia, and online. Six colleges and two schools comprise the University: University College, Colleges of Arts and Humanities, Business and Public Management, Education and Social Work, Health Sciences, and the Sciences and Mathematics, as well as the Wells School of Music, and the Graduate School.