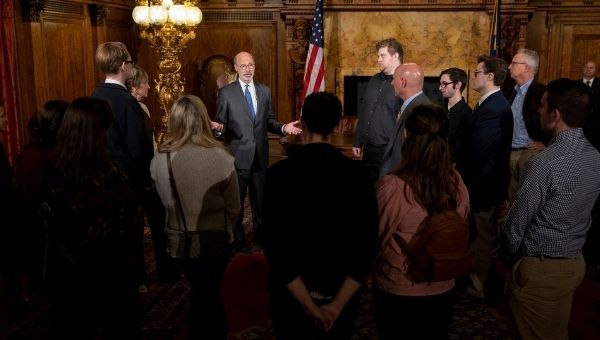 The class met once a week with Herrin visiting five times. Throughout the course, students wrote four papers where they imagined themselves as legislators and examined current legislation to answer how they would vote and why.

The trip to Harrisburg is a usual part of the class, though meeting Wolf was a bonus for this year’s students. He spoke to them about education and redistricting, especially Kennedy’s role in the process. Kennedy, an expert in legislative redistricting, was one of six individuals selected by Wolf for the Pennsylvania Redistricting Advisory Council.

From touring the building and sitting in on a committee meeting to spending time with Wolf and Herrin, Kennedy said his students left with a new perspective of the capitol.

“The totality of our tour was a great experience,” he said. “It was really good for students to hear from members who are alums, who may have graduated 10 years ago or so and now they’re in the legislature.”

During the last meeting of the semester, the class presented Herrin with a gift and card thanking her for her efforts as a Legislative Fellow. 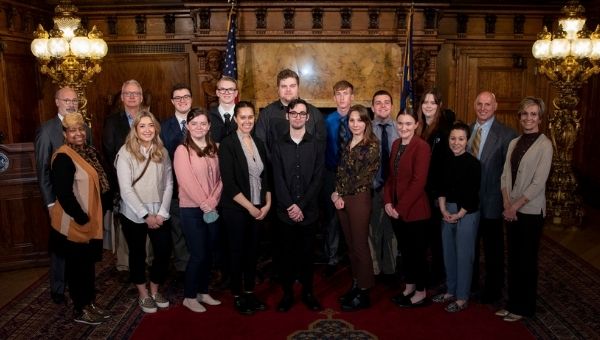 About the Legislative Fellow Program

In 2001, the Legislative Fellow Program was established at West Chester University along with other colleges within the Pennsylvania State System of Higher Education to help build bridges between lawmakers and the faculty, staff, and students who are part of these universities. The goal of the Legislative Fellow Program is to foster communication and understanding by working directly with a state legislator on both classroom and extracurricular projects.