The West Chester University Dance Team has brought home the gold as 2022 Open Division Hip Hop National Champions. The team won for the first time in West Chester University Dance Team history at the elite competition produced by the Universal Cheerleaders Association and Universal Dance Association (UCA & UDA) held at the ESPN Wide World of Sports Complex on January 16 at The Walt Disney World in Orlando, FL. State Senators Carolyn Comitta and Robert “Tommy” Tomlinson have invited the national champions to the Pennsylvania State Capitol in Harrisburg this spring to receive special recognition for their achievement, and ESPN will soon schedule a broadcast of the team’s winning performance.

Drawing nearly 225 cheerleading and dance teams from 44 states, the national collegiate competition brought numerous skilled athletes together to showcase their talents and represent their universities. The West Chester University Dance Team stood out as exceptional from day one. During the qualifying round, the team finished in first place and quickly earned a spot in the finals. With previous scores thrown out, the dance team performed for new judges the following day. After a full day of competition, the team was awarded the national championship for the first time in the club sport’s history at the University.

Led completely by its members, the West Chester University Dance Team is a student-run organization led by two team captains, Julia Adams and Payton Johnson, and assisted by a student executive board. With the goal of being campus spirit leaders while showcasing their athletic talents, the West Chester University Dance Team performs at University football games, men’s and women’s basketball games, as well as other special WCU occasions.

“Dancers have some of the most incredible skills, and they do it with grace while making it look easy,” said Payton Johnson, team co-captain. “In addition to being spirit leaders on our campus, members of the West Chester University Dance Team also work to be role models for future generations of female athletes. We want them to know that they are strong, powerful and brave.” 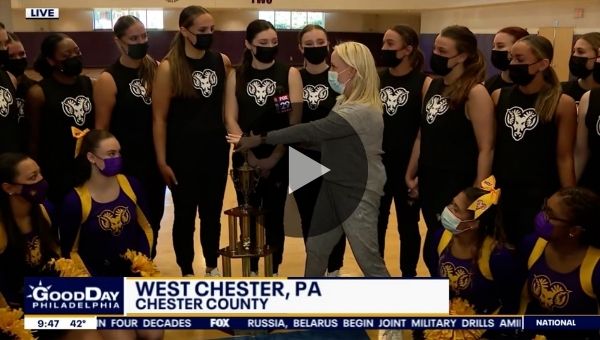 WATCH: FOX29 Coverage on the WCU Dance and Cheer Teams