Today's WCU education majors are able to participate in field experiences in a wide variety of settings. There are classes such as Pre-K Methods and Field, which incorporates six hours of field placement weekly, as well as intensive programs like the Community Immersive Semester for Educators (CISE), which is based in a West Philadelphia school and infuses service learning throughout the curriculum. These kinds of experiences complement the semester-long, full-time student teaching practicum (or other field experience) that is the capstone to every education major's academic career. 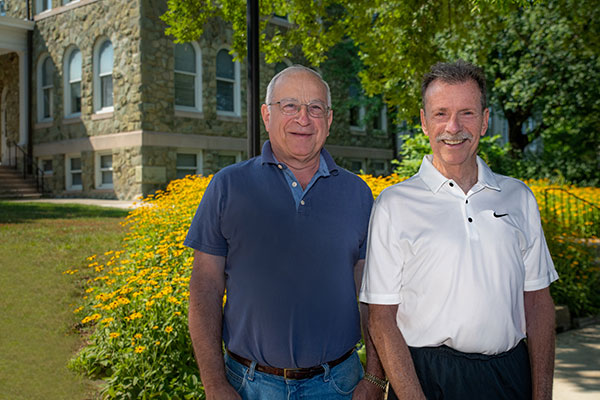 Demonstration School alumni Charlie Spadoni, left, and Bill Young, at Ruby Jones Hall, site of the school for much of its history.

But generations ago, it wasn't always easy for West Chester's administrators to secure student teaching placements for all the education majors who needed them. So was born the Model School, which later became the Demonstration School. The school opened in 1899 and remained in existence until the 1980s. The purpose of the school was to provide opportunities for West Chester education majors to observe classrooms and to practice teach. For many years the school was housed in what is now known as Ruby Jones Hall.

Ruby Johnson Jones has a special place in the Demonstration School's history and, indeed, in West Chester's history. Jones earned her bachelor's degree from West Chester State College in 1940 and her master's degree in education from Temple University. After teaching in Philadelphia area schools for many years, in 1961 she became a teacher in the Demonstration School. In 1968, Jones became the first African-American faculty member at West Chester when she became an assistant professor of education and supervisor of student teachers. Jones passed away in 1976 and in 1977 the Demonstration School Building was renamed and formally dedicated in her honor. By that point, the school had moved to what is now the E.O. Bull Center.

For West Chester students, the Demonstration School fulfilled a critical need for hands-on training under the tutelage of master teachers such as Jones. But the school also served an important function for area families. The Demonstration School provided a high-quality education with enrichment activities that went far beyond what most elementary schools could offer at the time. Tapping into the expertise found across West Chester's campus, students enjoyed physical education classes in a college gymnasium, art class taught by an accomplished artist, and music classes that were just as "incomparable" as the college band. The school served kindergarten to sixth grade and was open to the children of West Chester faculty members who lived nearby as well as students who resided in the school's feeder pattern. Families who didn't live in the school's enrollment boundaries could pay tuition to attend. 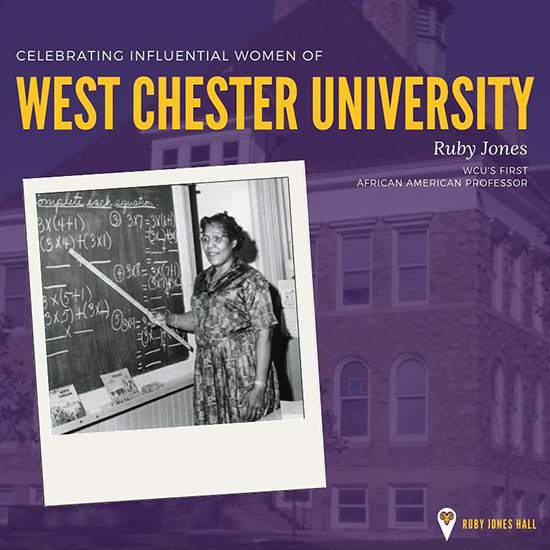 Ruby Jones taught in the Demonstration School from 1961 to 1968 when she became an assistant professor of education and supervisor of student teachers. She was the first African-American faculty member at West Chester.

A lot of adults might be hard-pressed to name all their elementary school teachers, let along details about Field Day and class trips, but many Demonstration School alumni share both a keen recollection and a passionate devotion to their alma mater.

"I can still play Windmills Blow in Holland on the piano," says Bill Young, a Demonstration School alumnus who met up with another classmate, Charlie Spadoni, outside Ruby Jones Hall one recent Friday morning. "In 6th grade we all had to learn the piano and that's what I played in the recital," says Young.

He recalls the Demonstration School as a warm, welcoming environment and happily recalls winning medals on Field Day. He says the physical education program was excellent and it clearly made an impact – Young went on to teach physical education for 45 years in area elementary schools before retiring in 2018.

Sue Fiorentino '86, attended the Demonstration School with her twin sister Beth from 1970 to 1976 and says that the experience was "extraordinary." An associate professor of management and WCU's current First Lady, Fiorentino says that the school's educational philosophy was progressive. "We had a state-of-the-art facility with a computer lab, music rooms that supported a robust music program, and an art program led by a talent artist, Bernice Shapiro. "I sat next to Jon Redmond in art class," recalls Fiorentino. Redmond went on to become an acclaimed artist known for his architectural portraits of West Chester that one New York Times reviewer described as having a "slightly blurred, Hoppersque reverie."

Students learned civics by establishing classroom communities that enacted laws, printed money and elected government officials. "Beth was the mayor; I was just a citizen," says Fiorentino with a chuckle. But she still rose to great heights at the height.

"In third grade, I scaled a wall at the E.O Bull in my Outward Bound rock-climbing class," she recalls. In fourth grade Outward Bound turned its focus to water sports and Fioretino says she took a canoe trip down the Brandywine that culminated in camping out under the stars.

"I remember our student teachers fondly and I hope that they received as much from their time at the Demonstration School as we did," says Fiorentino. "Today's WCU education majors get to venture out to all types of settings for their field experiences – urban, suburban and rural; small schools and large. But the common thread between the past and the present is that West Chester has always been dedicated to providing our education majors with the highest quality field placement experience. It all comes down to a commitment to student success, and that has been the driving force at this institution for 150 years."