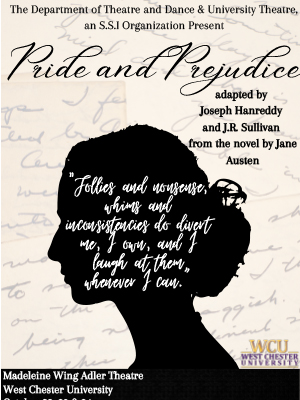 When the strong-willed Elizabeth meets the attractive but enigmatic Mr. Darcy is it possible for them to look beyond his pride and her prejudice to make the best match of all? All the wit and romance of this classic 1813 novel comes to life in this refreshingly fast-paced and engaging stage adaptation. Jane, Elizabeth, and Lydia Bennet are likely-looking girls in a period when a woman's one possible career is matrimony. Finding a husband may not be Elizabeth Bennet's most pressing concern, but with four sisters and an overzealous match-making mother, it's difficult to escape the subject.

Director Len Kelly says, “We wanted to return to the stage and bring live theatre back to our campus in a grand and celebratory manner. This beautiful show, with a cast of 24, music, dancing, and gorgeous costumes, does just that.”

Set in 1811, the costumes and dance numbers are reflective of the period. Dances are set to the musical etudes of composer Johann Baptist Cramer, the only real composer whose name is mentioned in Jane Austen’s novels.

Safety protocols developed by the student cast and production team were enacted to minimize the spread of COVID-19. They developed a plan that included weekly testing, masking other than when they are onstage performing for audiences, and all members of the ensemble agreed to minimize their exposure during the rehearsal process.

Playing the role of Mr. Darcy is Matt Melchior, a senior math major from Allentown, PA. Elizabeth Bennet is portrayed by Delany Lindholm, a junior from Harrisburg, PA. Other cast members include: