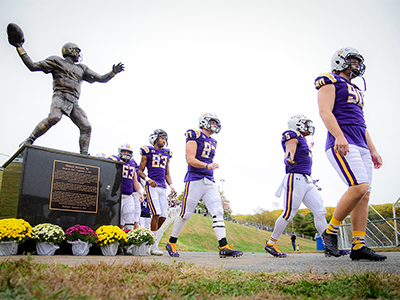 On September 11, 2001, Michael Horrocks ‘85, a former WCU football quarterback, was the copilot of the United Airlines Flight 175 that crashed into the South Tower of the World Trade Center. The Michael Horrocks Football Scholarship was established in 2012 in Horrocks’s memory and a bronze statue of him stands in WCU’s Farrell Stadium. The scholarship is awarded annually to a standout West Chester University Golden Rams football player by Head Coach Bill Zwaan and WCU Director of Athletics Terence Beattie. Since its inception, the renewable scholarship has awarded $21,225 to four student-athletes. This year’s scholarship recipient is Gabrial A. Schappell, a senior wide receiver from Reading, PA.

Joseph Genovese says, “The Air Line Pilots Association, International is proud to provide this support to the Michael Horrocks Football Scholarship Endowment Fund. As we commemorate 20 years since 9/11, it is important that we continue to honor our fallen heroes, who were also our beloved colleagues and friends, by ensuring that their contributions to our profession are never forgotten.”

Horrocks was a quarterback for the WCU’s Golden Rams football team from 1981 to 1984. After graduation, he served as an officer in the U.S. Marines as a pilot and later as a flight instructor. After retiring from the military, Horrocks became a pilot for United Airlines. Attendees for the check presentation on October 16 include:

The Air Line Pilots Association, International promotes and champions all aspects of aviation safety throughout all segments of the aviation community. Since 1931, their commitment to safety and the advancement of the profession has made them the guardians and defender of rights and privileges of the professional pilots who are members of the Association.

Enrolling more than 17,000 students, West Chester University is the largest member of the 14-institution Pennsylvania State System of Higher Education and is currently celebrating its 150th Anniversary year (www.wcupa.edu/wcu150/). Founded in 1871, the University is a comprehensive public institution, offering a diverse range of more than 200 undergraduate, master’s, and doctoral programs in more than 50 fields of study. In addition to the main campus in West Chester, the University offers programs through its graduate center, the campus in Philadelphia, and online. Six colleges and two schools comprise the University: University College, Colleges of Arts and Humanities, Business and Public Management, Education and Social Work, Health Sciences, and the Sciences and Mathematics, as well as the Wells School of Music, and the Graduate School.