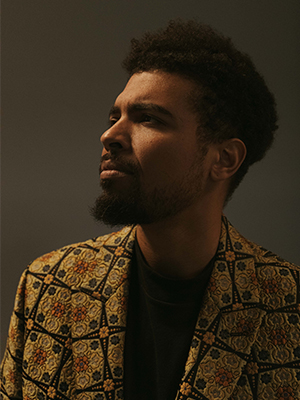 Nashville-based soul singer-songwriter and WCU alumnus, Devon Gilfillian ’13, will perform a free, public concert at West Chester University on Friday, September 17 at 8 p.m. The concert concludes a day of events in celebration of West Chester University’s 150th Anniversary and takes place in the Emilie K. Asplundh Concert Hall, Philips Memorial Building, 700 S. High Street, West Chester. Doors open at 7 p.m. and attendees are are requested to register in advance for free tickets at https://wcuconfservices.ticketleap.com/devongilfillian/details. If available, tickets will also be available at the door.

Growing up in Philadelphia on a steady diet of R&B, hip-hop, rock, blues, and soul, Gilfillian gravitated to records that ignited his mind while making his body move. Following his electrifying 2016 debut EP with upbeat singles like “High” and “Troublemaker” in 2018, Gilfillian signed to Capitol Records and hit the road––performing with the likes of Anderson East, Keith Urban, Gladys Knight, Kaleo, The Fray, Mavis Staples, and more. In 2020, Gilfillian released his debut album, “Black Hole Rainbow,” which was nominated for a Grammy – “Best Engineered Album.” After civil unrest in June 2020 following the murder of George Floyd, he re-recorded Marvin Gaye’s iconic album, “What’s Going On,” releasing it in fall of 2020 around the election. The project raised funds for low-income communities and communities of color, providing resources and education around the democratic process. In December 2020, Gilfillian performed his top 5 AAA hit, “The Good Life,” on Jimmy Kimmel Live. Gilfillian earned a degree in psychology from West Chester University in 2013. More information at https://www.devongilfillian.com/.

Gilfillian’s concert is preceded by a several events honoring the 150th celebration including: President Christopher Fiorentino’s “Welcome Back” address at 1 p.m.; a 2 p.m. celebration on the Academic Quad featuring a 150th Anniversary cupcake, the Incomparable Golden Rams Marching Band, cheerleaders, and mascot Rammy, with presentation of a Senate Resolution and House Citation by local state elected officials; and a 3 p.m. ribbon-cutting ceremony to open the exhibit: WCU 150: History and Heritage on the main floor of the Francis Harvey Green Library. At the ribbon cutting, Gilfillian will present a signed copy of his Grammy-nominated album “Black Hole Rainbow” to be included in the exhibit.

Enrolling more than 17,000 students, West Chester University is the largest member of the 14-institution Pennsylvania State System of Higher Education and is currently celebrating its 150th Anniversary year (www.wcupa.edu/wcu150/). Founded in 1871, the University is a comprehensive public institution, offering a diverse range of more than 200 undergraduate, master’s, and doctoral programs in more than 50 fields of study. In addition to the main campus in West Chester, the University offers programs through its graduate center, the campus in Philadelphia, and online. Six colleges and two schools comprise the University: University College, Colleges of Arts and Humanities, Business and Public Management, Education and Social Work, Health Sciences, and the Sciences and Mathematics, as well as the Wells School of Music, and the Graduate School.