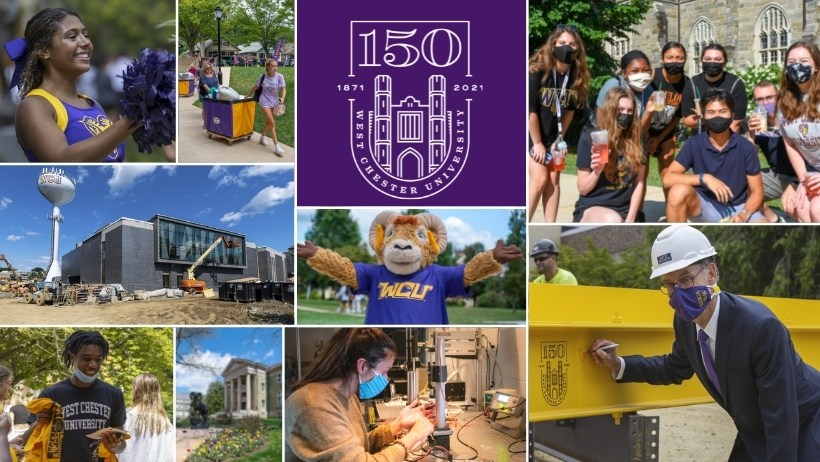 West Chester University President Chris Fiorentino will formally kickoff the University’s 150th Anniversary in his “Welcome Back” address to students, faculty, staff, and members of the Chester County community on September 17, at 1 p.m. in Emilie K. Asplundh Concert Hall on WCU’s campus. Using the historic in-person moment, President Fiorentino will celebrate the University’s numerous successes, including healthy enrollments; detail new national initiatives that are being forged on behalf of student success; announce the official launch of a $65 million comprehensive campaign, entitled 150Forward, as the largest campaign of its kind in the University’s history; and share his vision of how WCU can best continue to fulfill its mission of student success in the next 150 years.

Immediately following the address at 2 p.m., the Incomparable Golden Rams Marching Band will play as the Golden Ram cheerleaders and members of the dance team greet students, faculty, staff, and guests outside in the Academic Quad, which will feature purple and gold anniversary fanfare. President Fiorentino and Rammy the Golden Ram mascot will be among those cutting the 150th birthday cupcake.

Highlighting the outdoor celebration, local state elected officials will present a Senate Resolution and House Citation to President Fiorentino. The Senate Resolution and House Citation will honor West Chester University for being a distinctive leader in higher education that is committed to student success. The commendations from the Commonwealth will publicly recognize the University’s dedication to provide affordable access to learning and an intentional path that enables generations of graduates to succeed personally and professionally, while contributing to the common good.

Nashville soul singer-songwriter and WCU alumnus Devon Gilfillian ’13 will be another special guest who will be on hand to extend greetings to the University community. During the outdoor afternoon ceremony, Gilfillian will present a signed copy of his Grammy-nominated album “Black Hole Rainbow” to be included in the WCU 150: History and Heritage interactive museum exhibit.

Later that evening at 8 p.m., Gilfillian, who performed his top 5 AAA hit “The Good Life” on Jimmy Kimmel Live, will perform a free concert in Emilie K. Asplundh Concert Hall.

At 3 p.m., President Fiorentino, Associate Professor of Anthropology and Museum Director Michael Di Giovine, Museum Studies students, and others will cut the ribbon to officially open the WCU 150: History and Heritage museum exhibit, located on campus on the main floor of the Francis Harvey Green Library. Sponsored by the West Chester University Alumni Association and designed by students in WCU’s Museum Studies program, the interactive exhibit presents the history and development of the University from a Normal School founded to train high school-aged elementary school teachers in the post-Civil War period to a State Teacher’s College in the roaring 20’s to a comprehensive liberal arts university.

The exhibit features a timeline tracing 150 years of WCU’s history, illustrated with period photographs from University archives. Hundreds of artifacts lend depth to the experience, and include an autographed copy of Frederick Douglass’ biography, memorabilia from Olympian and Paralympian alumni, a drumhead used in the marching band’s Macy’s Thanksgiving Parade, flora specimens from the centuries-old Darlington Herbarium, a Torah scroll purchased by students for the University’s Holocaust Studies program, award-winning art and music, and various teaching technologies, including a rare Donner 3500 analog computer.

At the center of the exhibition is a clear, interactive time capsule created by Tom Haughey, associate professor of theater and the museum’s exhibits designer. Visitors are encouraged to deposit their own meaningful objects. Anthropology, archaeology and museum studies students will catalog and analyze the time capsule’s contents at the exhibition’s conclusion.

The iconic crown lights on top of the PECO building, located at 23rd and Market streets, will display a special anniversary message to WCU on September 17, 18, and 19. The Philadelphia skyline will light up with the following: West Chester University Celebrates 150 Years of Student Success! 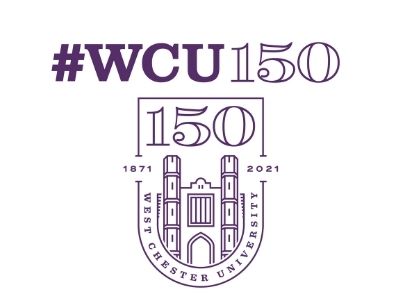