During “Shark Week,” Grad Student Is Researching Sharks Up Close 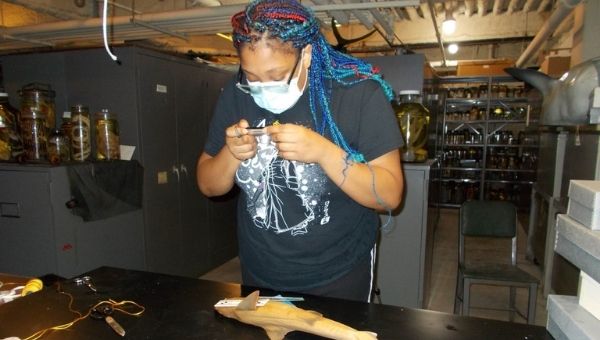 WCU graduate biology student Tytisha Harris is sad to be missing the Discovery Channel’s annual “Shark Week” programs the week of July 11, but she’ll be happily working with sharks in the University of Miami (FL) field school. She earned a scholarship to attend the field school, where she’ll be living and working on a boat while tagging and studying sharks and rays on a team with other students.

Harris is such a fan of sharks that she has a Build-A-Bear shark and recordings of many of the previous Shark Week programs. She says she’s calmest around water.

Guided by Frank Fish, WCU biology professor and expert in morphology (study of the form and structure of organisms and their internal and external features), she is conducting research on how sharks’ pectoral fins generate lift, a subject about which she says there is not much scientific literature. In early July, she was at the Philadelphia Academy of Natural Sciences of Drexel University collecting photographic data on shark control surface morphology for her master’s thesis (see photo).

Harris wants to dive into shark behavior after she earns her master’s degree, which she hopes will be next spring. She’s putting in extra hours this summer to catch up on her work since the pandemic had an adverse effect on her academically.

“I’m diligent and persistent and that’s what it takes,” says Harris, who notes she took tutoring for physics. “I understand and appreciate why [Dr. Fish] makes me work hard.”

Harris earned her bachelor of science in marine biology at Cheyney University.