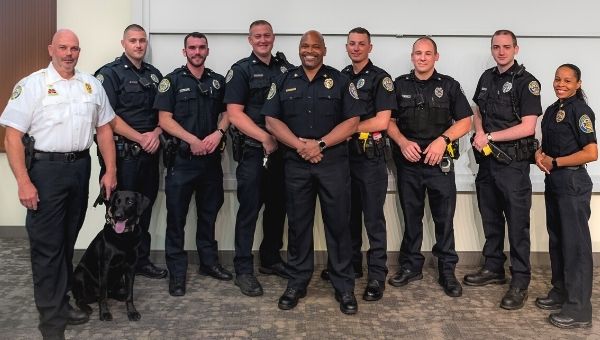 “We are very excited to have found officers who believe in what we are trying to do in this department ---- build meaningful relationships with students, faculty, and staff,” stated Stevenson, a veteran police officer who has been with the University for 31 years and was promoted to the rank of chief in June of 2020.

“It will continue to be important to gain the trust of students, faculty, and staff through increased community engagement,” Stevenson told the officers. “This means treating people the way that you want to be treated. Always remember that we are all in this together.”

The occasion was the first time in the department’s history that six new officers were hired all at one time.

“The hiring of these officers has been quite intentional,” Stevenson shared. “It is very hard to be a police officer right now and we need those who welcome reaching out to the members of our community and working together to open the lines of communication so all of us can remain safe. We want students to know that we are here for them, first and foremost. We support them and will do whatever we can to keep them safe. The focus of our department is community engagement, and we are committed.”