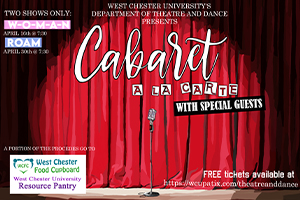 Students, alumni and special guests connected to West Chester University’s Department of Theatre and Dance will collaborate for the sake of a good cause when Cabaret à la Carte is presented virtually on Friday, April 16 and Friday, April 30 at 7:30 p.m.  Cabaret à la Carte is a two-night virtual performance series that features a variety of talent performing songs and telling stories. Each show contains different performances. Proceeds benefit the West Chester Food Cupboard and the West Chester University Resource Pantry. Tickets are free, but donations are highly encouraged at www.wcupatix.com/theatreanddance. Registrants will receive a link to the virtual performance, pre-recorded to adhere to COVID safety measures. Two live emcees will host the evening’s events. 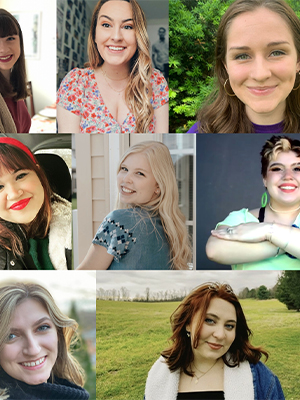 Directed by associate professor Liz Staruch, the Friday, April 16 performance, entitled W-O-M-A-N, highlights the work of female composers and lyricists from favorite Broadway shows, as well as female contemporary singer/songwriters. ROAM, running Friday April 30, is about finding a physical or mental escape that brings with it a change of scenery or fresh perspective.

After obtaining his MFA in Theatre from the University of Houston in 2014, special guest Michael Thatcher made his Broadway debut in The Play That Goes Wrong before taking the show on the road in the first Broadway national tour of the production in 2019.

Director Staruch says, “When the Department of Theatre and Dance were discussing what to produce for our musical theatre students, we decided that the challenge of doing a traditional musical online was too great. But that the year’s events provided a great avenue to teach our students about the genre of cabaret, crafting a cabaret package of story and song, and meeting the musical obstacles of online production head on to the best of our ability.”

The 14 student performers all crafted their own funny, poignant and authentic stories that Staruch says, “allow 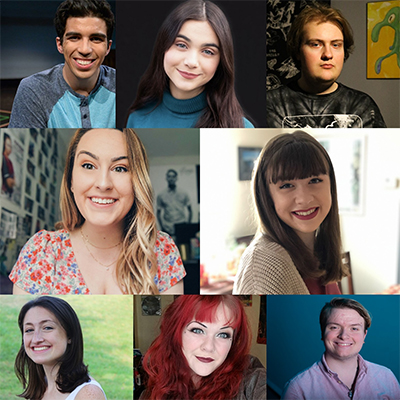 audiences to see the performer behind the song.” Staruch also contacted the two alums who will participate in the show.

She says, “We're all trying to find ways of connecting through song, dance, and text in this virtual world. Donald Shorter has done so well to represent WCU in the fields of Theatre AND Dance. I thought he would be inspirational for our students and audiences to hear and learn more about. Michael Thatcher was on tour in Wilmington, DE, when the world shut down. When we reached each other by phone during quarantine and I mentioned this project, he immediately agreed to join.”