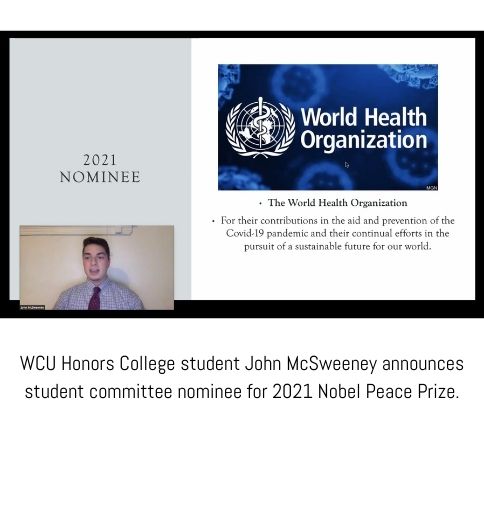 WCU’s Honors College has been pursuing a “nobel” idea for the past four years and is the only university in the U.S. to have a relationship with the Nobel Peace Institute. As part of this one-of-a-kind partnership, honor students from WCU have been permitted to nominate candidates for the Nobel Peace Prize to the Norwegian Nobel Committee to consider. On Wednesday, November 18, the WCU Nobel Leadership Series (NLS) held its closing ceremonies where the student committee announced WCU’s candidate to submit for consideration for the 2021 Nobel Peace Prize. 2020 Swope Scholar and Honors College Nobel Events Coordinator John McSweeney, a WCU junior who is majoring in economics and finance, represented the student committee and announced the World Health Organization as the candidate being put forward by the students.

During the closing ceremonies, 51 student participants 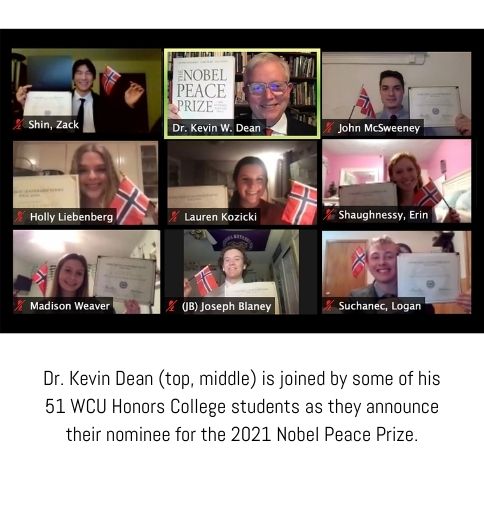 were recognized with a certificate and presented with a Nobel lapel pin, as well as a flag of Norway. Vice Chair of the Norwegian Nobel Committee Dr. Henrik Syse will meet virtually with all student presenters and those completing the leadership series on Saturday, November 21, 1 - 2 p.m.

HONORS 353: Norway’s Nobel Idea for Promoting Peace and Developing Leaders is a course designed to explore Nobel laureates and ways of better understanding leadership. The series involves students from various majors and disciplines. It concludes with having students submit names of individuals who deserve to be awarded the peace prize. The students in HON 353 then deliberate about the top three candidates, mimic the Nobel Peace Committee selection process, and unanimously propose a name. One year, the candidate WCU Honors chose to submit was Umra Omar of Kenya. Honors students are aware that they can recommend a name for consideration for the Nobel Peace Prize.