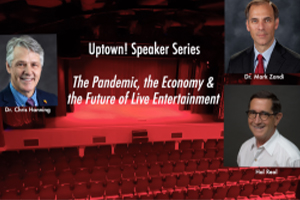 Dr. Christopher Hanning, Dean of West Chester’s Wells School of Music, will moderate The Pandemic, the Economy & the Future of Live Entertainment, as part Uptown! Knauer’s Speaker Series on Tuesday, October 27 at 7 p.m. Tickets to the virtual event are $10 each at www.uptownwestchester.org. Advance ticket purchasers will receive a link to the livestreamed event one hour before the discussion. 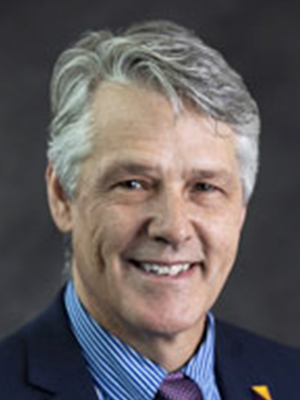 The Pandemic, the Economy, & the Future of Live Entertainment also includes Dr. Mark Zandi, Chief Economist for Moody’s Analytics, and Hal Real, Founder & CEO of World Cafe Live and Co-Founder of National Independent Venue Association (NIVA). Zandi and Real will detail the economic toll the pandemic has placed on the performing arts industry and how the election might affect the future. As moderator, Hanning will ask and take questions from the live chat during the event.

Hanning says, “I very much look forward to being part of this discussion. It is paramount that we all work together and discuss how live entertainment can be sustained and revitalized during and in the aftermath of the pandemic. At the Wells School of Music, we have had to reinvent ways to educate our students. We also need to think creatively about how the arts and live entertainment can continue to educate and entertain audiences, and how we as a community can offer our support.”

Dr. Christopher Hanning is Dean of West Chester University’s Wells School of Music. As a recording artist, he has performed with over 20 orchestras, chamber ensembles, and jazz groups across the U.S. and on the international stage. He is an award-winning recording artist for NFL Films and presents clinics at Universities, conventions, and percussion festivals across the United States and abroad.

Dr. Mark M. Zandi is Chief Economist of Moody’s Analytics, where he directs economic research. A trusted adviser to policymakers and an influential source of economic analysis for businesses, journalists and the public, Zandi frequently testifies before Congress and conducts regular briefings on the economy for corporate boards, trade associations, and policymakers at all levels. He is the author of Paying the Price: Ending the Great Recession and Beginning a New American Century. He also authored Financial Shock: A 360º Look at the Subprime Mortgage Implosion, and How to Avoid the Next Financial Crisis, which is described by the New York Times as the “clearest guide” to the financial crisis. He is a co-founder of Economy.com.

Hal Real is the Founder and President of World Cafe Live, an independent live music venue located in Philadelphia. In 2008, he launched LiveConnections, a nonprofit dedicated to music education, reaching more than 50,000 participants. In response to the COVID-19 crisis, Hal co-founded the National Independent Venue Association (NIVA), whose 3,000 members are engaged to preserve this industry. He also co-founded the National Independent Venue Foundation (NIVF), a nonprofit organization aimed at creating an emergency relief fund and other funding channels to support NIVA and its members.