At the threshold of its 150th anniversary year, West Chester University has hoisted the last steel beam needed to “top off” the framing of The Sciences & Engineering Center and The Commons, the newest and largest building in the University’s 149-year history currently under construction. President Fiorentino recently visited the campus construction site, located directly across from WCU’s Student Recreation Center along 275 North Campus Drive in West Chester, to sign the 12" high x 33' long beam prior to its lift and lofty placement. The project’s lead benefactors joined him to mark the historic moment and sign the beam: Founder, President, and CEO of ProMetrics Marc Duey, who gifted $1 million on behalf of the Duey family; Student Services, Incorporated (SSI) Chair of the Board of Directors Bernie Carrozza ‘66, representing SSI and its gift of $1 million; and West Chester University Alumni Association (WCUAA) President Bill Scottoline ‘74, representing WCUAA and its gift of $150,000.

Known traditionally as a formal “topping off” ceremony, the longstanding construction custom commemorates the completion of a building’s framing phase. Painted “West Chester University gold” and bearing the University’s 150th anniversary logo, the beam is the outer-most and highest beam in the NW corner of the facility.

The building’s construction is especially timely, as STEM students are needed now more than ever to help advance and heal the world in which we live. “Digital convergence, artificial intelligence, and advanced engineering design will make our students engage like never before and open a gateway to integrating across disciplines to present eloquent solutions to the vexing challenges of today, like COVID-19, and of tomorrow,” said Marc Duey, founder of numerous health care companies, including West Chester Biomedical AI, LLC; ProMetrics, Inc.; Atrin Pharmaceuticals; Felicitex Therapeutics, Inc.; and TarMeta Biosciences.

Upon completion in the spring of 2021, the new $130-million facility will be home to the University’s rapidly growing health science curricula, physics, and the new biomedical engineering program, as well as expansive academic and support spaces.

“For the SSI family the new facility epitomizes and captures the essence of our mission – putting students first,” said Student Services Incorporated Board President Bernard J. Carrozza ’66.  “SSI would like to commend all of the partners who had the vision to provide and the future to create. It is not just about stone and steel, it is about students and stability, students and opportunity, students and their specialness…”

President Fiorentino reinforced the University’s unyielding commitment to students despite the enormity of a global interruption. “In a year that has been nothing short of a rollercoaster for our University and our world, today is both a highlight and a triumph,” remarked President Fiorentino. “At West Chester University, nothing --- not even a pandemic --- will ever stand in the way of our mission of advancing student success. The Sciences & Engineering Center and the Commons will be an educational game-changer for students in the sciences, as well as for the entire campus community. Thank you to everyone who played a part in making this dream a reality.”

Recognizing that meaningful connections happen in a variety of settings, the facility will also feature a Commons, a welcoming and stimulating environment for students to gather, eat, and work. The 800-seat residential dining facility will encompass more than 16,000 square feet of the building’s entire second floor. An intentional and progressive design will encourage students to use the facility as a third space and an exciting location to meet, get a healthy meal between classes, and engage in other formative, non-academic activities.

In addition to serving students’ academic and co-curricular needs, the building will also include a 450-car parking garage.

The three-story facility is being built with the initial support of two critical leadership gifts. Founder, President, and CEO of ProMetrics Marc Duey, also an adjunct professor at the University teaching in the Marketing Department and the Pharmaceutical Product Development Program, in association with the Duey family, made a generous gift of $1 million toward the important project. ProMetrics serves the decision support needs of specialty biopharma executives with a focus on patient-level data impacting prescription efficiency. Under the direction of Mr. Duey, ProMetrics has served over 150 clients, completed more than 10,000 projects, and played a role in the launch of dozens of specialty brands that have reached sales in excess of one-billion dollars per year.

The West Chester University Alumni Association also contributed significantly to the building project with a generous donation of $150,000.

“At a time when West Chester University enrolls more than 4,000 STEM majors, Marc and Maureen Duey; Student Services, Incorporated; and the West Chester University Alumni Association are investing in the next generation of WCU graduates who will enhance our region and our world as innovative engineers, nurses, nutritionists, physicists, public health professionals, and scientists,” said West Chester University President Christopher Fiorentino at the facility’s groundbreaking ceremony on April 27, 2019. “All of us are grateful to these generous benefactors who are creating new possibilities and great opportunities for an increasing number of WCU students who are dedicated to preparing themselves for high-performance careers that will make a considerable difference to many.” 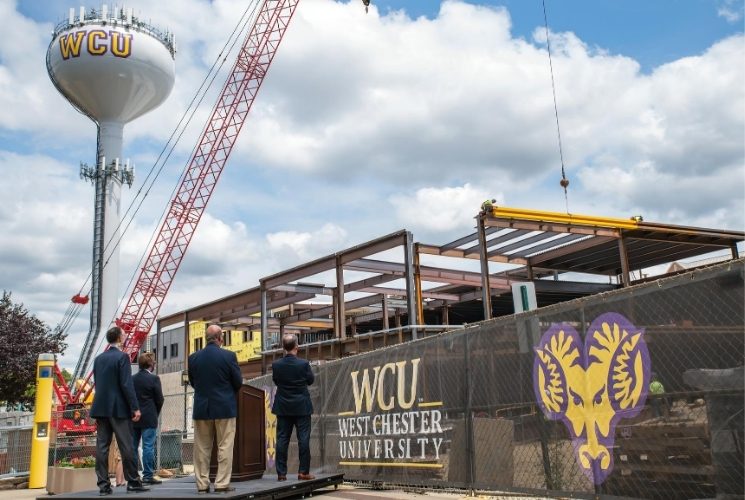