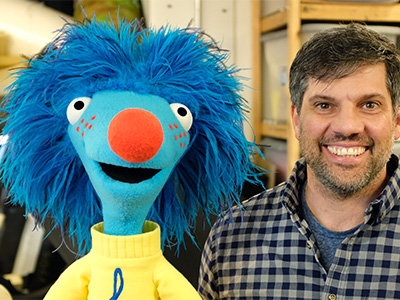 When the Daytime Emmy Award nominations were announced on Thursday, May 21, a West Chester University was professor was “beyond honored” to find himself among the nominees.

Jeremy Holmes, assistant professor of graphic and interactive design in the Department of Art + Design, was nominated for Outstanding Special Effects Costume, Make Up and Hairstyling for the design and build of his two starring puppets in the brand new Helpsters, a TV show developed by Sesame Workshop that launched on Apple TV Plus on November 1, 2019.

Holmes says, “I am beyond honored to have worked on this project with the remarkable artists at Monkey Boys Productions in Glenside, PA. Congratulations and virtual hugs to all of you, to creator Tim McKean, and to the entire Helpsters family."

From Abington, PA, Holmes has been an assistant professor in West Chester University’s Department of Art + Design since 2015. He is the illustrator of the successful children’s books Poem-Mobiles, Secrets of the Dragon Tomb, The Templeton Twins, The Emperor of Mars, The Eye That Never Sleeps and On the Day I Died. He has worked for Random House, NPR, The New York Times, Chronicle Books, Penguin and Abrams Books, among others. For more information on Jeremy Holmes visit www.jeremyholmesstudio.com.

For more information about the 2020 Emmy Awards, visit https://theemmys.tv.