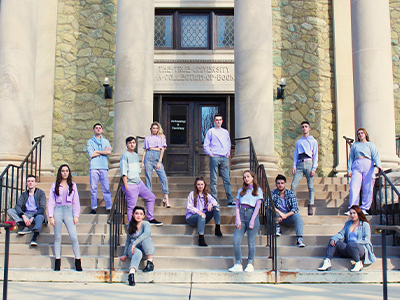 If you binge-watched all the Pitch Perfect movies, there is an event made for you at West Chester University!

On Saturday, February 15 at 7 p.m., ten a cappella singing groups from around the region will take the stage in West Chester’s Emilie K. Asplundh Concert Hall, 700 S. High Street, West Chester, to compete in the 2020 International Championship of Collegiate A Cappella (ICCA) Mid-Atlantic Quarterfinals, the competition that inspired the Pitch Perfect movies. Varsity Vocals presents and sells tickets at the door for $25; $20 for students with valid I.D.

Spencer Camacho, Under A Rest’s Music Director and a Music Education major says, “This is an amazing event, and we’re so excited to be able to perform here on West Chester’s campus in front of a home audience.”

Camacho adds, “We are always excited to see the talent other groups have in store for competition. We hope to leave everything we got on stage, and as always, make the audience feel something.”

Can’t make the competition? Students can get a sneak peek of both Under A Rest and High Street Harmonix for FREE on Friday, February 14, in the Sykes Ballroom at 5 p.m.