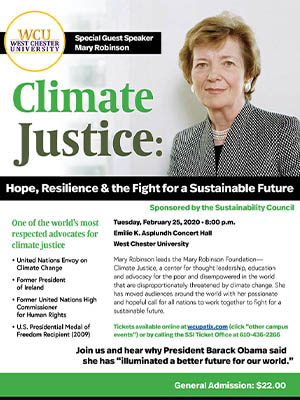 One of the world’s most respected advocates for climate justice, Mary Robinson is a sought-after speaker whose TED Talk received a standing ovation and moved audiences around the world with her passionate and hopeful call for all nations to work together to fight for a sustainable future. Her new book, Climate Justice: Hope, Resilience & the Fight for a Sustainable Future, received glowing reviews from former world leaders and the environmental and human rights community. Robinson leads the Mary Robinson Foundation—Climate Justice, a center for thought leadership, education and advocacy for the poor and disempowered in the world that are disproportionately threatened by climate change. Robinson was awarded the U.S. Presidential Medal of Freedom by Barack Obama in 2009.

Robinson served as president of Ireland from 1990–1997 and UN High Commissioner for Human Rights from 1997-2002. Currently, she is Adjunct Professor of Climate Justice at Trinity College Dublin. She is Chair of The Elders, a member of the Club of Madrid, and the recipient of numerous honors and awards. She sits on the advisory board of Sustainable Energy For All (SE4All) and also serves on the board of the European Climate Foundation. Between 2013 and 2016 Mary Robinson served as the UN Secretary General’s Special Envoy in three roles; first for the Great Lakes region of Africa, then on Climate Change, and most recently as his Special Envoy on El Niño and Climate. Mary Robinson’s first book was the memoir, Everybody Matters, and was published in September 2012.